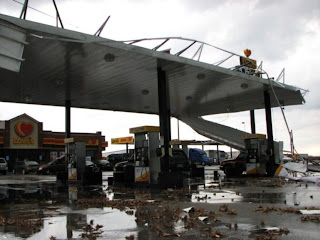 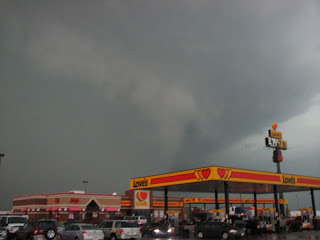 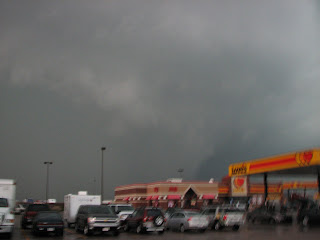 Another Thursday and another High Risk day in this incredible season, having already seen 9 Tornadoes over the past week expectations were running high for a notable Tornado outbreak in parts of Kansas and Nebraska. What we did'nt expect was to be apart of the EF2 Tornado and associated 130Mph RFD Winds itself. We started the day in Concordia (Ks) with a chase target of Kearney (Ne) as we were making our way west along I-80 the 1st storms of the day initiated and Tornado warnings and a Tornado watch box was issued by the SPC. We had an ITV Cameraman with us and as this was the last day he wanted to sample some large hail so we purposely core punched near a place called Overton. We were now in the core most of the way as we headed east back to Kearney, just west of there a Cone Tornado crossed the road in front of us and blew a goods train with about 100 carriages of coal clean off the track (An eye opener LOL) We followed this Supercell through Kearney where extensive damage to roofs and trees was encountered, all power had gone as well. We then relocated to get some Gas and snacks at a Loves service station just South of Aurora. Making sure to check the radar before we went in and got a Subway the shower duly looked like some heavy drizzle coming towards us so plans were then made to get the Hotel sorted for the night further east in Lincoln (Ne) Now this is when the fun started - In the time it took our crew to get fed and watered the said shower cranked up to a fully blown Supercell with 1/2 Mile wide Tornado on a heading straight at us, one of Dave Ewoldt's friend at the SPC Said he had never seen such a quick transformation in a storm in over 30 years. Day quickly turned to night and there was nothing else for it other than to ride out the Storm and hope for the best, pieces of wood and hail were smashing into the car and Lightning seemed at ground level, this went on for a full 6 minutes and when lightness came back the Garage was completely trashed. We later found out the Tornado missed us by 400 yds and stayed just North of the Interstate, what we got were similar strength winds but the RFD/Tornado Boundary etc
Pictures show the Tornado approaching and the damage to the Love's Gas Station.