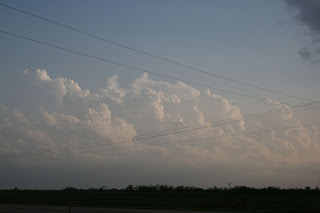 Started the day in Childress (Tx) with an initial chase target of Enid (Ok) but after grabbing data in Clinton we stopped dead in our tracks as it was apparant that a Meso Low had formed in the Oklahoma Panhandle and if the Cap could be busted it would be much further west than the earlier Models suggested, this caught a lot of Chasers out who were along the I-35 Corridoor in N Oklahoma. We waited and waited...........and waited and finally one lone storm broke the cap about 10 miles to our South West, straight away we got under the base near Arapaho and watched a decent enough Funnel cloud, took some Nickel to dime sized hail and followed the Storm for the next 90 minutes until darkness. Alas once again no fully fledged Tornado but a great chase all the same.