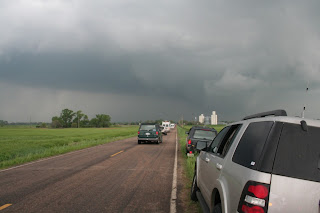 We awoke to the news that Greensburg had been devastated just 9 hours earlier by an EF5 So today was going to be a hard chase as the High Risk was much in the same area as the day before from the Oklahoma Panhandle up through South Western Kansas. Storms started early this day and the trick was to pick them off as they raced at 55mph North Eastwards, we got suckered by a great looking storm and followed it all the way up to the I-70 Corridoor. If we had held back we would have seen many Tornadoes, as it was we saw a brief Tornado at Stafford before ending the day at Ellsworth (Ks) This was not the end of the day though as the Tornadoes continued after dark and I had to get us out of the way at around 10pm as a Wedge Tornado was on the ground to our South West doing damage, this destroyed a trailer park about 1 mile to our North West and unfortunately killed 2 eldery people. At times the chase was ridiculous with over 500 Chase vehicles on the roads, we were even stuck in a traffic jam for about 30 minutes at one point, High Risks that fall on a Saturday are not good!
Posted by Paul at Tuesday, March 23, 2010