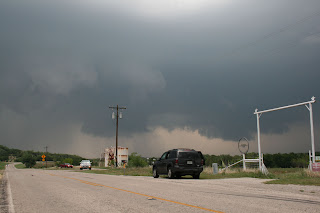 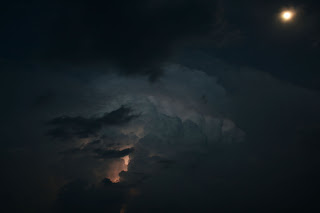 Started this day under cloudy and drizzly skies in Childress but with a Solid Moderate Risk we were hopeful today, once again Insane Cape (5,000jkg) and SE Moving Storm Motions would be the order of the day. We were right under the only storm of the day near Breckenridge and us and about 1,000 other US Chasers had to jostle for position on tiny windy roads just North of the I-20!! The 1st Storm tried and promply died but the 2nd storm rapidly became severe and starting dropping 4" Hailstones on its NE Side, we wisely stuck to the South and South-West side and saw a nice Tornado briefly with this storm about 4 miles SE Of Breckenridge (Again will post Video Capture of this) After letting the Storm cross I-20 In front of us we retreated to Weatherford for the night and shot some Lightning pictures.
Pic 1 - Wall Cloud just North of Graham (Tx)
Pic 2 - Moon and Lightning Pic SW Of Weatherford