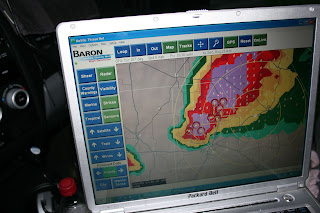 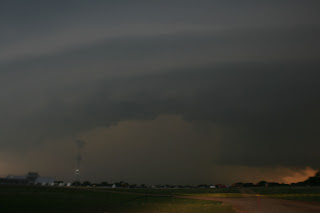 Picked up the guests from DFW & By the time we left the airport at 4pm some severe storms had initiated along I-20 West of Weatherford, so we jaunted out that way to be on the 1st storm by 6pm, this was an LP Supercell that produced a nice Funnel Cloud, after leaving this storm another HP Supercell to our South West was getting stronger and stronger near to Brownwood (Tx) we hot footed it south and then went west at Comanche, about 5 miles East of Brownwood we encountered an amazing Mothership Supercell which had tops up to 73,000ft. Tornado warnings were screaming out from the Weather radio for our location, 3 wall clouds were observed and rapid rotation but yet again Tornadoes were illusive, Brownwood itself took 100mph straight line winds and the place got trashed. Ended the day at Weatherford and had a nice meal at Chilli's.
Pic 1 - Our position on the SE Side of the Brownwood Supercell
Pic 2 - Huge Wall cloud under Mothership Supercell