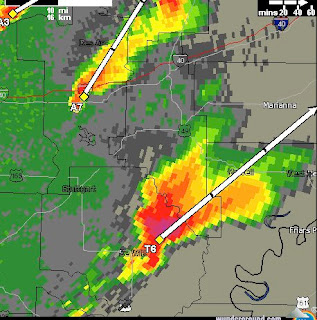 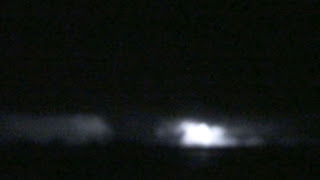 Today the SPC Had Issued a High Risk for most of Arkansas with corridoors of Long Tracked Violent Tornadoes Likely. Our starting position was Springfield (MO) And Chase target was Stuttgart (AR) Storms fired at about 4pm and at once started rotating, one problem we had was the Arkansas River and had to let the Storms down near Monticelli cross the River before Chasing them, the 1st came up just East of Pine Bluff and here we witnessed a Low Contrast Cone Tornado and nearly got nailed by some incredible Cg Lightning bolts, we then went for the Tail End Charlie and caught up with it just at Sunset North of De Witt(AR) I positioned us down the West side of the NNE Moving Supercell, this Storm had a persistant hook echo for nearly 50 Miles and we cut underneath it and onto the SE Side of the Storm, as we crossed over the damage path trees were shredded and all the Lights were out in the Town of De Witt, as we took the Highway North we witnessed a Large Wedge Tornado to our North East. Followed this Storm as it crossed into Tennessee and stayed the Night at Memphis (TN)
Pic 1 - Radar of the De Witt Supercell
Pic 2 - Nighttime Wedge Tornado