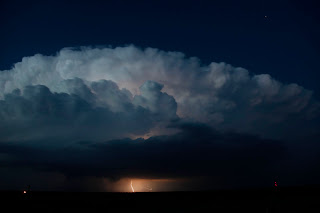 Today we started in Wichita (Ks) and had a chice to make wether we went for Storms on the CO/NE Border or took a massive gamble on wether a lone Supercell could overcome a pretty stout Cap and form along a stalled Warm Front. Well being a Gambler we took the later option and won but just about. It was about 830pm before the Cap finally gave in and a Lone Supercell erupted just West of Mcpherson. We were literally 15 miles from this and were one of only a handfull of chasers on this storm. As it grew it started to ride the front and turned hard to the right, as it did so it became Tornado warned and dropped just the one Cone Tornado near Hope (Ks) before rampaging east towards Emporia. We did get the Tornado on Video but the best pictures were of the Structure and Lightning as the Storm rolled across the Flint Hills.
Tornado Number 3 for the Season and all have been at Night!