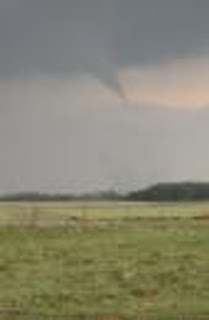 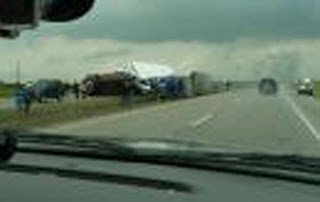 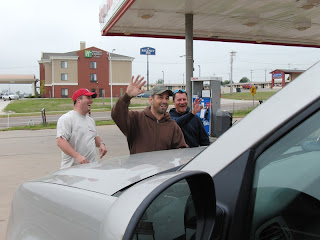 We had High hopes that today would become significant and so it did, all the major models were predicting a Tornado Outbreak and the SPC Issued a High Risk. My target area was Enid (Ok) and so we left Norman mid morning and jaunted up towards Enid for some Lunch. Where we stopped Vortex2 and Sean Casey were also lunching so we had some pictures taken and got a Tour of the TIV. At about 2pm I noticed the Dryline was stalling much further West than first thought so we headed off and Intercepted a Supercell just West of Medford. This would eventually put down the Wakita Multi Vortex Tornadoes. We viewed these from about 3 Miles to the West and the Tornado had a similar look to the Harper County Tornado from 2004. We followed this Storm but due to Storm speeds could never catch up to the 70mph East moving Supercell. We did briefly glimpse the Barrel EF4 Tornado that wreaked Havoc near the Blackwell area and along I-35 But cut off the Chase at 6pm when it was obvious we could not get in front of the line. Ended up seeing 3 Tornadoes but gutted at learning that an EF4 Hit Norman barely 3 Miles from our starting Hotel. DOH!

Some Pics of the Tornado, Sean Casey and Damage on route
Posted by Paul at Thursday, July 01, 2010