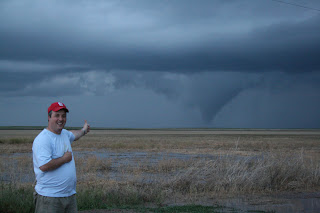 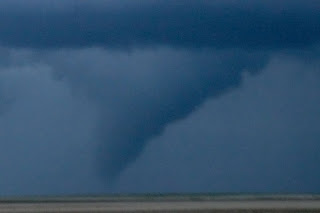 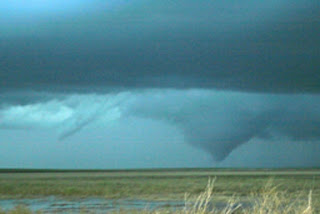 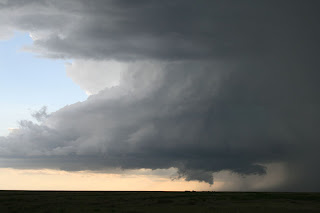 Started Tuesday May 25th From Colby (KS) Once again and ambled down towards South West Kansas, our general Target area was from Garden City to Springfield. Had Lunch in Garden City and positioned along the Dryline, kept moving South along the Storms until I found one that looked pretty damn Healthy so went west and Investigated. This then turned out to be Tour 3's best Chase of the trip, we started by watching a Wall Cloud down a dirt track that quickly formed a Funnel Cloud, sadly no Tornado with this, then followed the ENE Supercell cutting along it's Western Flank as we went North. Ran into some sizable Hail and also Hail Fog, the car was struggling and had to turn off the Anti Steering Device and due it McCrae Style. The Storm then did a hard right Turn just SE Of Springfield so we punched through mainly Quarter Sized Hail and emerged on the Eastern Side, then went South and watched some great Structure and more Funnel Clouds. It was now getting late and hearing of numerous Tornadoes on the Storms to our North I could not fathom why ours which was the Southern Most had not produced. But we stuck with it until the death and once another Storm went up to our Storms West things changed rapidly, our Storm then started to move North Westwards and Collided with the storm further West, rapid growth and Tornado Genisis occured and within 10 Minutes we were watching the Biggest Tornado of the Day in the USA, A lovely Cone Tornado about 4 Miles to our North West moving North West!! This was about 10 Miles NE Of Walsh (CO)

A great end to a very long day.