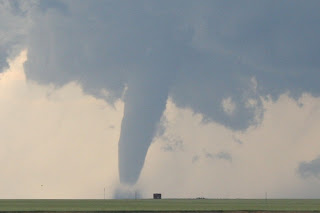 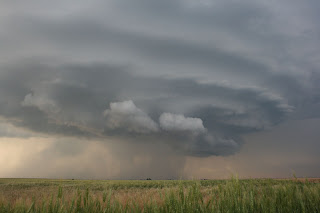 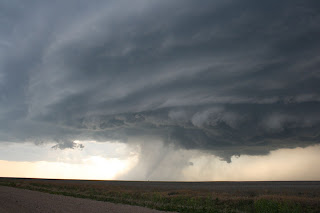 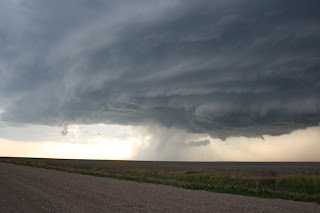 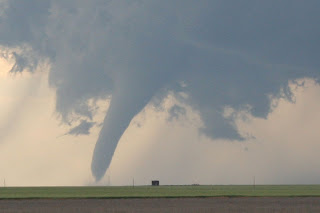 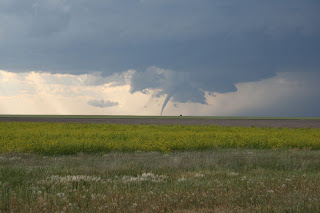 Monday 31st May was the first Chase Day for Tour 4. After picking everyone up at DFW Yesterday and being kept awake all night by a Violent Hailstorm and amazing Lightning Storm we drearily left Norman (OK) With a Chase target of the Guymon to Boise City area. Along the way on I-40 A lone Supercell Fired near Springfield, seeing as the outlook was barely a Slight and with a 2% Tornado Risk I was amazed with 2 reports of Tornadoes already received on Spotter Network. So we hot footed it West towards Woodward and then Guymon where we filled the Car Up. Luckily we were just in time for the main event. This Amazing Supercell that had already been ongoing for about 4 Hours was just about to crank up another level. Unforunately I could not get onto the optimum side (West in this Instance) so we settled for the SE Side of the SE Moving Tornadic Storm. This thing was literally rolling towards us at 5-10mph. At about 7.09pm a very strong Funnel Cloud started making it's way to the ground, when it finally tunched down it was a Massive StovePipe Tornado, thankfully it stayed over open fields near Campo (CO) It was on the ground for 15 Minutes before roping out. Then the Structure got insane on this storm, another brief 1 Minute Tornado dropped before getting wrapped in the Rain/Hail, still this Storm was not done and another 5 Minute Tornado dropped. The Storm then started to move Straight South and started Interacting with Storms moving North from Dumas, when we approached Guymon as darkness fell we had 4 Supercell Thunderstorms surrounding us, the lightning was insane in all directions. Ended the day in Liberal (KS)