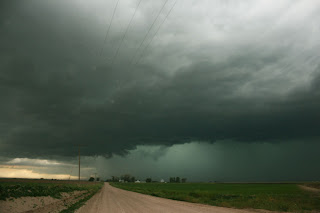 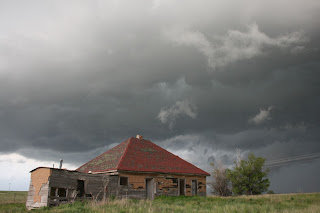 Started the Day in McCook Nebraska with a Chase Target of Kimball in the Nebraska Panhandle. Storm were expected to fire along the Wyoming Front Range and roll eastwards. The Best Looking Storm and the one we intercepted was near ScottsBluff. We set up due east of the Supercell and noted a few Wall Clouds and Minor Rotation but this Storm was transitioning quickly into a HP Hail Monster. Some serious 4" Hailstones were falling to our North so we got out of the way and sampled the next Storm to follow an almost identical Path just North of Scottsbluff. This would be the Storm that nearly every chaser in the US Was on, the South East road out of ScottsBluff looked like the M25 At Rush Hour, insane driving was also noted. We stopped briefly to observe Power Flashes to our West and I at the time put it down to Wind Damage from what looked a very Outflow Dominant Storm but it turns out from Verne Carlson's Video that this was a brief Multi Vortex Tornado that was throwing Billboards into Power Lines.

Richard has some great footage of us approaching the town of Bridgeport with Tornado Sirens blaring for about 10 mins, rotation on the road in front of us and the towns flag getting ripped apart. Just west of town the dreaded Level Crossing Lights were flashing, 4" Hail just behind us and Tornado Sirens wailing, somehow we got through and fled South of Town towards Sidney with the masses, the only Car going the other way was the TIV (Lol) Let the MCS Smash into the Hotel at Sidney and ate dinner and shot some Lightning with Wall Clouds.