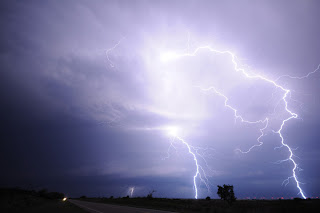 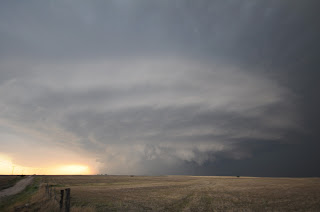 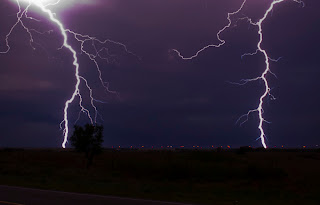 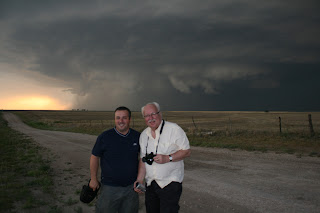 So the last day of the Season is upon us and usually amazing things happen on the last day, we started out in Dodge City knowing that we could not commit to the Colorado risk but hopeful things could happen further South towards Dallas Fort Worth. We had lunch in Liberal and my target area of Guymon was not too far on from there, At this time a line of storms were to our east near Woodward and I got suckered into them when a decent MD was issued, one such storm rapidly turned Supercellular and the chase was on, unfortunately for us it took off back into Kansas so we had to give up on it. At around 530pm all was looking lost and by this time a raging Supercell was hitting Guymon so my mood was not too great......But things always happen for a reason and I noticed a blip on radar NE Of Amarillo, upon looking South West I saw a pretty decent rock hard updraught about 70 miles to our South West. I got the cars loaded and off we went, around 30 minutes later we were sitting about 15 miles NE Of a pretty LP Supercell which had ground to a halt, in fact it did not move in 30 minutes. Then it did move and this time to the right (Eastwards) could this be it, at this time the winds were screaming out of the South East as the LLJ Had cranked up. The Storm was rapidly growing grabbing all the sultry air to it's South East and it had nothing to impede it. I re-positioned the guys back east and then south by about 7 miles, we were now looking at a beautiful Classic Supercell crawling towards us at 5mph, then the Storm got Tornado warning and we witnessed a brief Tornado North West of Shattuck before it got rain wrapped. Then the day got even better, the Structure on this Supercell went absolutely nuts and people had open mouths with what they saw, this is probably the 2nd best structure behind Wynewood last year for me and looked a lot like the Campo storm from the 31st May last year. We pictured this beauty for a while longer and then headed further south and east flanking it to the south. By now darkness was falling, we did witness another halfway down Funnel cloud and insane rotation but no more Tornadoes. Further east we had another Supercell moving along the same line, incredibly this looked identical to the one we just left with Night-Time Cg's lightning up the swirls. At 11pm we had to call it a night although we would have stayed longer if we could, we made our way back to Yukon for the night and very nearly ran out of Petrol due to most places losing power due to the storms. But what an end to the Season!
Posted by Paul at Wednesday, June 29, 2011