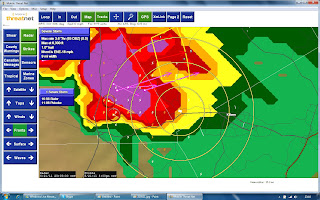 Changeover day at DFW - The last guest arrived at around 530pm which meant the Oklahoma Risk was beyond us today which was a shame as an amazing cell went up between Ardmore and Oklahoma City which produced a photogenic Tornado. We still got some storms to the South of DFW Around the Killeen area and one went on to become Tornado warned. Overall though a bonus day as we were not even expecting to chase, on hindsight maybe we should have just trecked North and got into a much better position for the 22nd May which would become known for the devastating EF5 Which would hit Joplin (Missouri) just 1 day later from a right moving Supercell that started life near Independence (Kansas) and then tracked SE Towards Joplin at around 530pm. Unfortunately 151 people would lose their lives on this Sunday afternoon.
Posted by Paul at Wednesday, June 15, 2011