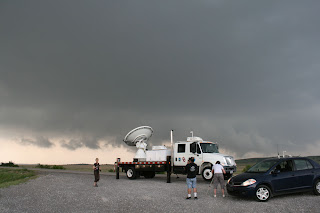 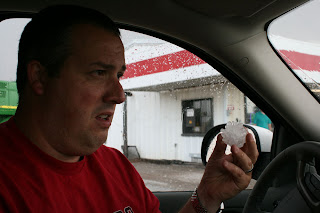 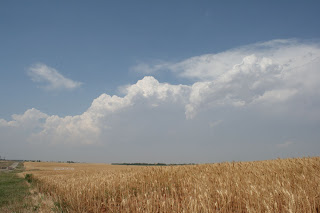 Started this day in Norman with a decent Slight Risk in Western Oklahoma and it turned out a lot better than planned with Cows getting rolled over, numerous strong gustnadoes, very dangerous Lightning and Golf Ball sized Hail, we also saw the full spectrum of LP, Classic and HP Supercells. Initial target for lunch was Clinton along the I-40 And a nice storm erupted near Elk City just west of there. Went south through Cordell and sat just east of a very nice LP Supercell, allowed this to pound us with some pretty impressive hail (Biggest size was Golfball) Then the chase was on as the storm started to turn to the right and move east at 10mph. As we flanked the storm to the south it started to take on more of a Classic Supercell appearance as it had left the dryline. We were literally under the Rain free base and wall clouds all day so any Tornado reports with this storm were probably wrong, we did see some impressive gustnadoes, one of which knocked over some cows in a field about 300 yards away from us. After that we had a Cg Lightning bolt land between both chase cars and temporarily turn off the cars instrument panels. The storm was now turning into a HP Supercell and tracking towards the SE So we then went to be the chased as is usual with these storms. Finally gave up on the storm just North of Lawton and headed back to Norman for the High Risk day in much the same area on the 24th May!
Posted by Paul at Wednesday, June 29, 2011