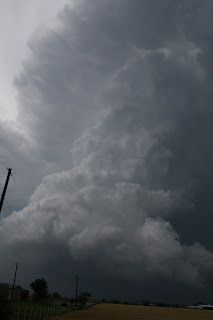 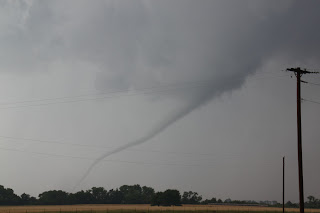 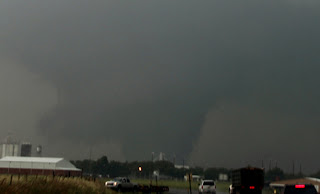 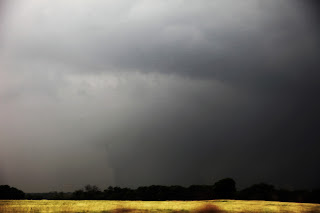 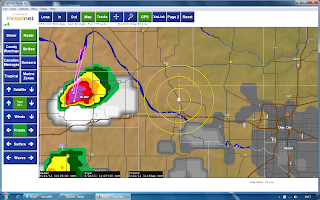 This day had been showing on the Models for about 5 days and we duly got our High Risk issued by the SPC. Cape of 3,000jkg and T/td Spreads of 82/72f with a stalled boundary near the Oklahoma and Kansas border would set the stage for Violent Long Tracked Tornadic Supercells, storm motions initially looked to the NNE At around 35mph but any storm would rapidly turn to the right ( East) and become a Cyclic Supercell with the chance to drop numerous Tornadoes (Some Strong) We started the day in Norman again and my target was once again along the I-40 Corridoor between Clinton and Elk City. We had Lunch in Subway at El Reno and this place just 3 hours later would get hit by 1 of the 2 EF5 Tornadoes on this day. At around 2pm a beautiful Supercell erupted just North of Elk City and started moving towards the NE, We had a great road to intercept and pulled up to a fantastic double wall cloud with insane rotation at around 245pm. I Noticed on the radar the storm starting to turn hard to the right so re-located us further North and east and it is here we witnessed our first Tornado near Oakwood at 315pm. This Tornado started to become rain wrapped so more re-positioning was needed to the east and North by about 10 miles. I then caught sight of an amazing 3/4 Mile wide wedge Tornado to our North West, we were about 5 miles to the SE Of this so we gunned it straight North towards Canton and got to within 2 miles of the now photogenic EF4 Wedge Tornado that was literally sitting just North of the Town. Unbeknown to us at this time it was over Lake Canton and created a small Tsunami as it crossed that Lake. On getting to Canton I wanted to get even closer so took a road that looked like it was made for us going ENE - But the Storm was getting seriously affected by another Tornadic Supercell about 35 Miles to our South (This was the EF5 Tornado that was affecting Piedmont and El Reno) The Mesocyclone on our Storm occluded and the Tornado Dissipated at this time, we then arrived just South of Fairview another 10 miles North East flanking the Supercell with a rotating Wall Cloud about 1/2 Mile to our North West, the Storm was in its last lifespan by this time and put down an absolutely beautiful Photogenic Elephant Trunk Tornado just across a field to our North West. After this the storm rapidly broke apart just SW Of Enid and effectively our chase day was over at this point as the Piedmont Storm was affecting our route south on I-35 Back towards Oklahoma City. We ended the day once again in Norman with an eye on the next High Risk on the 25th May in Arkansas and Missouri. One amazing thing about this day is just how lucky the people of Oklahoma got, at one point there was 2 x EF4's and 2 x EF5's lined up West of the highly populated part of Oklahoma within 120 miles of each other but they all thankfully dissipated west of the Populus! Later that night the same storm system put down a Night-Time 1 Mile wide wedge tornado on the Oklahoma and Arkansas border!
Posted by Paul at Wednesday, June 29, 2011