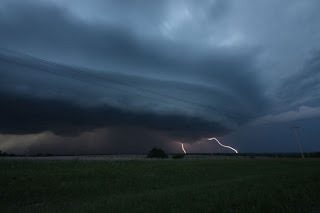 The 19th May 2010 turned out to be one of the best chases we have ever had, as is normal this was a changeover day so the early part of the day we were down at DFW Airport watching the early events unfold. Today would see a dual risk from an Outflow Boundary Set-Up in Northern Oklahoma and an explosive Dryline Set-Up further South trailing into North West Texas. As guests were arriving on International flights during the day the plan was to leave 1 car at DFW & The early arrivals could come along for a bonus chase day leaving DFW Around about 3pm.
The early High Risk duly fired around 2pm and a Lone East moving Supercell near Hennessey put down multiple Tornadoes, this was gut wrenching watching this unfold 220 miles away to the South, but there were also signs the Dryline was sharpening west of I-35. We finally left DFW Around 4pm and headed North along I-35 To try and beat the rush hour traffic out of the Metroplex, we got into Oklahoma around about 530pm and headed West then North to sit and watch the dryline. At first cells were struggling and collapsing, one cell east of Dibble did become Tornado Warned and we noted a nice Wall Cloud, this cell was moving North East and we started to get cored by mainly dime sized hail, at this point our 2 cars becaem separated and I made the decision to blast south, after a few minutes I came out of the hail and just in front of me to my South West a beautiful White Cone Tornado was about to cross the road in front of us, I let it move to my east and then went east at a crossroads near Dibble. After this the storm became very High Based and my attention was drawn to a lone Storm firing about 45 miles to my South just North West of Ardmore. So back South down I-35 We went after the Tail end Charlie. We made great time getting south and pulled off the Interstate near Wynewood, I went West then South and pulled up to observe a lovely LP Supercell, about this time we started to hear the Hail Roar from this cell and noticed on the warnings of 4" Hail falling close to our location, the cell was also transitioning into a Classic Supercell at this point and the rotation started to gather strength.
I ordered everyone into the cars and hit the gas to fly South as things were developing almost overhead, we went through a few valleys and drove literally under the first stages of a developing Wedge Tornado, Wet Rfd rainfall hit our car from right to left (W-E) And then thousands of leaves of tress from left to right (E-W) We had to bomb south fast out of the circulation. We carryed on and crested a hill with a great vantage point back to our North (From where we had just come from) and there it was a Wedge Tornado with Power flashes crossing the road where we had just been. After some pictures of Tornadoes 2 & 3 we then went further east and set up for some more Lightning and Cell Structure Photography and noticed Tornado number 4 dropping down and a Text Book Perfect Classic Supercell in front of us. By now it was completely dark so we followed a little way further east for some more pictures before calling it a night and heading back South into Texas to meet the later arrivals and try to tell them how our day had gone.
We were NOT Very popular with some of the people, but they would see a nice Tornado just 6 days later anyways.
For more pictures of the other Tornadoes this day please see below
http://plainschaser.blogspot.com/2010/07/19th-may-2010-ok-high-risk.html
Posted by Paul at Friday, February 24, 2012