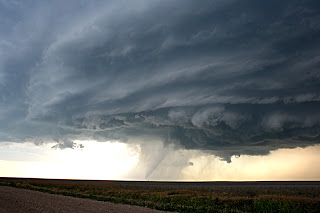 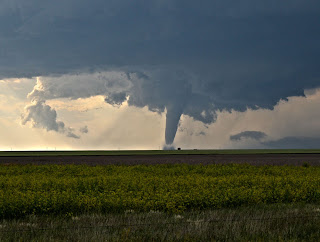 It's only 12 weeks until we embark on Stormchase 2012, so I will be re-living my favourite 12 Chases over these weeks and today we start with the Campo Tornado from May 31st 2010.

After picking up the guests from Dallas Fort Worth Area I already knew a Solid Moderate Risk would be available in South Central Nebraska for Day 2 of the trip, the original plan was to head up to Oklahoma City for the first night and then a travel/positioning day for Day 1 to get into position for an expected Moderate Risk on June 1st. The trip up I-35 Was quite eventful with numerous summer type thunder showers along the way, we booked and stayed in the Guest Inn @ Norman, later that evening a SE Moving Borderline Supercell producing large hail initiated just to the North West of Oklahoma City and was moving at a snails pace SE Wards towards our position. That particular cell kept us awake most of the night with amazingly close Cg's, the worst of the Hail missed us and impacted Lake Thunderbird to our east. Upon waking up the next morning a "See Text" risk in SE Colorado had been Upgraded to a Slight Risk with a marginal 2% warning for Tornadoes. This gave us a tough decision to either stick with Plan A, And head North on I-35 Through Kansas or go for a bonus day way out to our west. The drive for the 31st May's risk was still 5-6 hours drive but I calculated if we ended up somewhere near Liberal (Kansas) we could still make S Central Nebraska the next day so the decision was made and off we trecked down I-40 Westbound. After stopping for Lunch in Weatherford a lone Supercell had initiated just SW Of Springfield (Colorado) this storm was hardly moving and had attached itself to a stationery boundary. It was still a good 3-4 hours drive away and we started to get reports of Funnel Clouds already being produced, the chase was well and truely on now so we headed North West towards Woodward and then onto Guymon in the Oklahoma Panhandle.
At about 7pm we finally started to get a glimpse of the Supercell to our North West, it was an absolutely beautiful Classic Supercell which was moving SE @ 5mph. I took a couple of farm roads North to sit about 3 miles from the Colorado/Oklahoma Panhandle Border. We arrived just in time as no sooner had we got out of the car and set up the cameras then the amazing Campo Tornado touched down, fit first looked like a perfect Wizard of Oz Tornado coming at us across the open Prairie but quickly turned into a Fat Stovepipe Tornado. This Tornado was on the ground for 18 Minutes. The original Mesocyclone then occluded and Tornadoes number 2 and 3 were put down, Number 2 on the ground for about 2 minutes and number 3 for about 5 minutes. The Supercell then took on amazing Sawblade characteristics with sick structure, it finally left it's boundary at about 825pm and started moving South, after that is quickly died, we then had another 3 Supercells coming up at us from Dumas, I stuck with my plan to stay in Liberal and at one point we were in the middle of the donut hole of 4 Surrounding Supercells, we stopped in Guymon and ate a late dinner in Braums and let the storms overun our location, after that we headed the short journey North to Liberal to stay the night.

All in all this was an amazing Storm to chase given the marginal manner of the risk and we did indeed make Southern Nebraska in plenty of time...........And yes that was a Bust Day! Lol
Posted by Paul at Wednesday, February 15, 2012