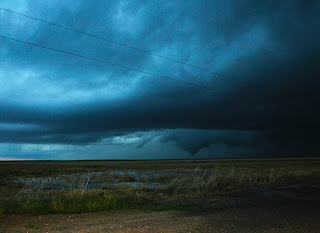 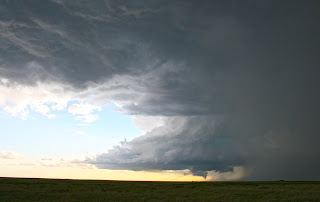 We started this day in Colby (Kansas) and the Set-Up was for an almost Stationery Dryline draped from New Mexico up towards the Western Nebraska Panhandle. Our focus would be Western Kansas and SE Colorado for mostly Hail Producers and Photogenic Supercells, Tornado Opportunities would be limited but the SPC Still had a 5% Risk over the Slight Risk Area.
We ate lunch in Garden City and Storm Initiation occured around 2pm near the Springfield area of Colorado extending down into New Mexico. We went west and watched a few cells struggle as they left the dryline. At around 4pm one cell started to become dominant and began to show Supercell Characteristics, we noticed a Wall Cloud and headed west down a dirt road to position right under the rain free base, rotation was noted but alas no tornadoes at this time. We punched through the back side of the storm and sampled some small hail, we were now West of the Storm just to the South of Springfield, the back side of the storm was beautiful with a full hailbow and hail fog noted. We then punched back through the storm to sit on the east side literally on the Kansas / Colorado Border near Ulysses.
The time was ticking by and it was not 730pm in the evening so only 1 hour of light left, our storm still looked good on radar and in front of us was a very pretty Classic Supercell. Over the next 20 minutes our Storm almost stationery now started to shrivel on radar but new development to it's west created a cell merger. I have been taught by Dave Ewold that cell mergers can quickly bring about a rapid strengthening of the Storm and a quick evolution to tornadogenesis and luckily for us this is what occured. At about 830pm and in the fading light our storm became tornado warned and rapid violent rotation was noted, we headed back west as a funnel cloud started to descend along dirt roads and then a very nice Cone Tornado touched down at 841pm just near the Town of Walsh in SE Colorado. This Tornado which was rated as EF2 Was on the ground for about 10 minutes. We stopped and filmed and took photographs of this before shooting Lightning in the darkness, a great reward for a very long day. That same Storm 30 minutes later was a mere patch of drizzle as everything waned as the boundary de-coupled, we spent the night in Springfield and had a celebratory Pizza and Buds!
Posted by Paul at Friday, March 23, 2012