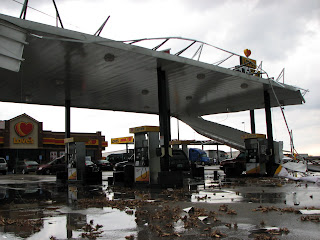 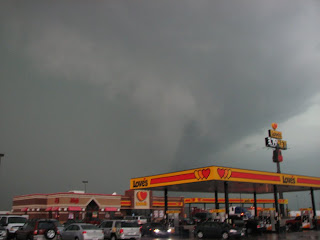 This makes it onto my 12 by sheer crazyness over memorable chases. Today the SPC Gave out a High Risk over portions of North Kansas and upto Central Nebraska. We started the day in Concordia just on the Eastern Edge of the High Risk Box with a few targets in mind, the first was where we were in Concordia and the 2nd in South Central Nebraska and along the I-80 Corridoor. Storms started to fire near to Lexington and as we had already had lunch in York we meandered are way along I-80 Westbound to approach the oncoming Storms. Our first look at the furthest East Supercell was near Overton a small town just west of Kearney. As we had an ITV Cameraman with us we played in some of the hail, but this put us behind the Storms in the Core region, this Storm started cranking up so we followed a now evident wall cloud staying just to it's west following it into Kearney. Ahead of us we noticed Power Flashes and spotted a Cone Tornado to our SSE, Also just to our South was a Coal Train sitting at Red Lights atop an embankment, as the RFD Winds around the backside of the Tornado hit our location it toppled about 25 of the Empty Coal Wagons and pushed them clean off the tracks. We continued to follow this Storm which was now just East of Kearney and came across sporadic EF1 Damage to the Town. We then punched back through the Core and headed South to reach the I-80 Interstate again. Our Storm was now not looking so good so we reconvened in a Love's Petrol Station just South of Aurora, Storms were firing further South just West of Concordia and we had a decision to make on wether we could make these before nightfall, I really wish we had because the Supercell at Beloit (Kansas) was insanely incredible from the pictures we saw the next day.
After the decision had been made to play around with some new developments about 15 miles to our west we got some Gas Station Snacks and totally took our eyes off radar for about 3 radar scans, when we got back out of the Gas Station with our burrito's and snacks the sky to our west was pitch black, this storm had obviously cranked up in the 15 minutes we took our eyes off the ball, the gas station lights then went off and people scurried inside the Gas Station and into the cooler area (Safe Area). Dave and the others went to their van and I powered up our Laptop to take a look at what was about to hit us, before the Laptop could even come on we went from Daylight to complete darkness with Hail and zero visibility, I lost site off pretty much everything for the next 6 minutes, a wooden shed that was just to my west had dissappeared, a Winnebago just next to me had toppled in a southward direction, about a minute later it had now toppled the other way (Northwards) I knew we were in a bad situation and very near to a tornadic circulation. Finally the light started to improve and I could start to make out the Gas Station awning which was lying on the forecourt in front of me. People started to appear shell shocked and as it became safe to get out of the cars what was in front of us was an incredible scene, cars with smashed windows, the Gas Station had taken considerable damage, 18 Wheel Trucks visible on I-80 Scattered on their sides like a kid had played with them and threw them down on the floor, to my south Powerlines were across the road. I have since seen a video showing a White Wedge Tornado (Very Fast Moving) hitting our location and after the SPC Did a damage survey they deducted an EF2 Tornado at 1/2 Mile Wide had indeed hit our location with winds of 136mph. We made our way to Lincoln where we stayed the night and ate a very sombre takeaway Pizza. Not a nice experience and a few mistakes I will never make again in a hurry.
https://www.youtube.com/watch?v=4BD82rLxRrw - Video of RFD & Train Trucks blown over
Posted by Paul at Thursday, March 29, 2012