Todays Chase Target was just South of San Antonio which would be below the MCS Boundary, but to get there we had to drive south from our starting position of Dallas Fort Worth and through some non severe MCS's first near Waco and then near Austin. I decided to dive south ust past Austin and finally arrived on the warm side of the boundary near Kenedy. What greeted us was much more structure and a nice low base, we are fairly certain we saw at least a funnel cloud just as the storm was tornado warned but could bot be 100% sure due to terrain. What did surprise me this day was just how good the terrain for chasing is between San Antonio and the Gulf Coast and also what sort of Supercell structure we were about to see in the coming hours. We picked up another HP Supercell just south east of Kenedy near Goliad, this was a great storm and we tracked just south of this HP Cell watching a rotating wall cloud for a long time, we went further south to Refugio and saw probably the storm structure of the day, a lovely HP Supercell, once again this storm could not get a Tornado to the ground, our final storm of the day would be near Beeville, some great Lightning was shot with this 4th Supercell of the day, we would then let this cluster of storms chase us to Corpus Christi where we would stay the night (Who would have thought we would be staying at the seaside on a storm chase) This line had a sting in it's tail with a Tornado warned storm in the line, an insane 95mph gust was recorded close to our location and lot's of damage was reported including big 18 wheeler trucks blown over and damage to grain silo's north of town. At times it felt like a Hurricane with palm trees bent over and some locals said it was one of the worst storms to hit the town in 20 years. 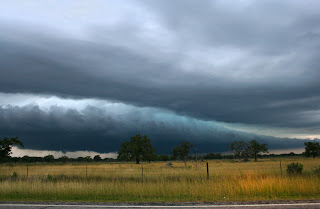