After the weather obliging and not having anything to offer us on our changeover day we had a nice Slight Risk in the Texas Panhandle for today. With all the new guests safely ready to haul out we left DFW Early and headed up towards the Texas Panhandle along Highway 287. My target today was Amarillo, Models were breaking out a few areas of precip across the panhandle so hopefully things would go to plan whilst we rushed towards out target. After having lunch in Vernon we took the road North at Childress towards Shamrock, some storms had already fired near Dumas so I wanted to keep our options open, these were struggling on radar so on we pressed towards Amarillo with a view to intercept the storms further North now near Pampa if they could become more severe. At about this time a storm initiated just over Amarillo, so we parked up and watched, at first it raced North East and then another cell fired, this was deja vous happening here, just like the 21st May we had 2 cells duking it out again, that time the Northern Storm won, but this time it did not take long (30 minutes in fact) for the Southern Supercell to gain the upper hand and boss the issue. We let the Northern Storm core us with some small hail and then headed south towards the Palo Duro Canyon for the Southern Storm which was moving South East. Hoping for some photogenic vista's over the Canyon we were not dissapointed, and got an added bargain when the storm became Tornado warned. As we pulled off into a scenic viewpoint on the Southern side of the Canyon, to our west the Supercell started to gain rapid rotation, an amazing wall cloud formed just to our west and numerous funnels pointed to the ground. Off South we went again following this storm all the way to near Plainview, we encountered incredible blowing dust storms along the way, the storm was morphing from outflow dominant to cycling and gaining strength with inflow winds on numerous occasions before totally dissipating around 8pm. 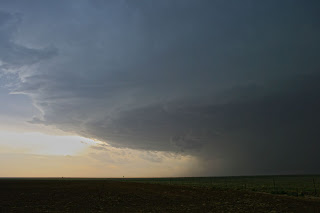 Classic Supercell just south of the Palo Duro Canyon near Amarillo in the Texas Panhandle.

As we were about 15 miles from Plainview we decided that was it for the night and started to look for hotels, but......................to our North near Hereford another storm went severe warned and we could already see the Lightning to our North West, this was a very electrically active Storm so we took the view to try for some Cg Lightning photography, we were certainly impressed with the results and it was a great end to the day. 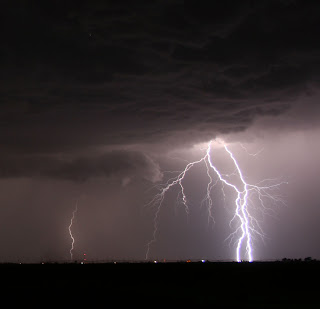 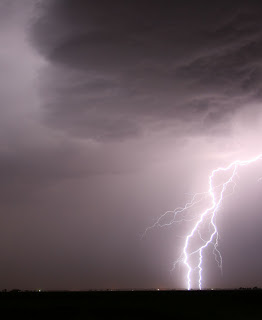 Getting much closer now, not much longer left before the rain starts at our location. 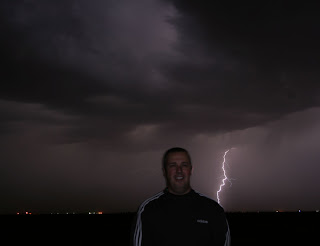 Messed around with the torch shining up our faces with longer exposures, this bolt looks like it is striking my left shoulder.

We finally left and headed for Plainview eating at Applebys and staying the night at the Super8 Motel.