This was the last chase day for us for the 2012 Season and the SPC Had a broad Slight risk area from the Black Mountains area of South Dakota all the way to NE Colorado, a meagre 2% Tornado risk was in this area as well. My gut instinct had been to wait for something to fire in Eastern Wyoming and catch it South of Rapid City in the 2 days prior to this event, you can probably guess that I screwed up today and on the most photogenic Tornado of the Season as well. After driving through the Badlands on the scenic route south and west we emerged into Nebraska just NE Of Chadron, cells were starting to fire further south on the Colorado and Nebraska border near Julesburg, so sit and wait or head south to intercept on a very bad road network just west of the Sand Hills of Nebraska, of course I chose the stupid option and blasted south on roads that took an age. We finally got down towards Bridgeport and were north of the Storm moving ENE Near Kimball only to see it completely fall apart when we got to it, meanwhile to the North West of Chadron a Huge Supercell had fired near Hot Springs and was slowly moving South East, this looked incredible on radar, parts of me already knew the structure was going to be epic on this storm and a sick feeling inside my stomach was starting. We continued on south to Julesburg and had another strong Supercell to our south in NE Colorado, whilst we went south our old Storm that fell apart started to organise again into a lovely little Supercell so we were in between the two, 1 photogenic Supercell to our North and another to our south, we went south about 25 miles to sit just NE Of the Southern Supercell, it did not look much tbh, whilst the storm to the north started to look better again, so back north we went, and as soon as we left the storm to our south it goes Tornado warned, this was turning into a nightmare chase and on the last day as well!! About this time and whilst checking facebook on the internet we started to see the amazing Tornado pictures from the cell just North-West of Chadron, my day was now complete and my mood matched it with a face like I had just lost a winning 10 Million pound lottery ticket. We followed our storm east a bit towards North Platte for some Lightning photography before calling it a day and heading to Sidney for our hotel stop. The worst chase of the whole trip had to be the last chase day and in Nebraska as well, we still got some nice pictures but it was no consolation for the missed opportunities and hard on us as the tornado occured in my initial target area as well, I guess that's chasing at the end of the day, you win some and you lose some, this time we lost and pretty badly as well! 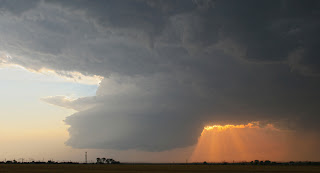 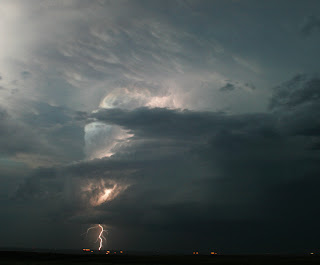