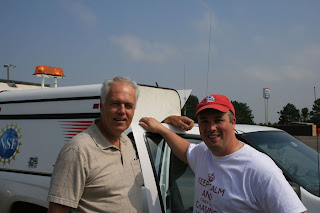 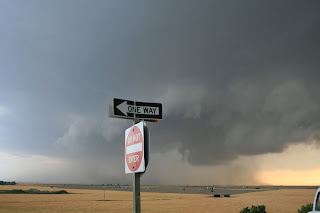 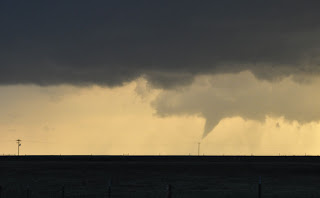 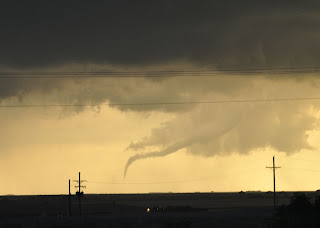 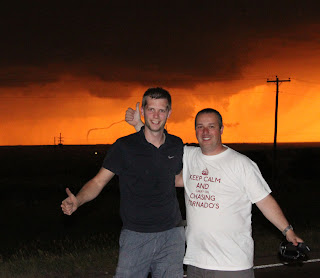 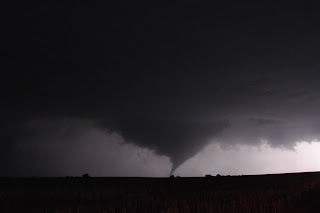 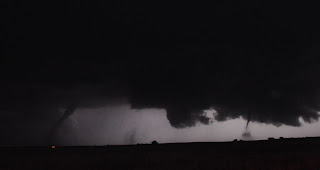 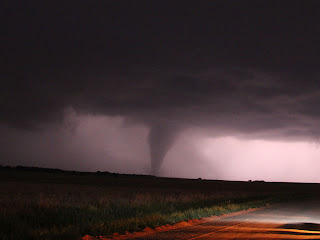 Little did we know before this day started that this would become 1 of the top 3 chases for the 2012 Season and also a new record for me for the most tornadoes in 1 day. Overnight the models had changed and upon awaking the SPC Had a 5% Tornado Risk back towards the west from where we came the day before, this was also my favourite Set-Up in the Plains namely the Dryline and Warm Front Set-Up, Tornado chances all season have been hampered by near record breaking temperatures and temp/dewpoint spreads being way too high, again no such problem today it seems with High Temps along I-70 Of 79f and Dewpoints progged to be 66f. So after looking at data my target was an area between Russell and Hays (Kansas) as this is where we believed the Warm Front would reside during the day. We left Topeka at 10am and headed west towards Salina, we got to Russell in good time and ate lunch at Subway, we were getting thick fog and drizzle at our location which was a sign that the warm front was pretty much overhead, clearing skies to the south near Dodge City had allowed the temps to climb towards 90f down there with towering cumulus visible on the Satelite, so the dryline was already starting to sharpen with dewpoints of 56f at Dodge dropping to 48f almost within the hour. We approached Hays and went through Town, as we went to the South side we parked up and the view to our South West was to an incredible Updraught building, this was moving straight at us and almost instantly exhibited Supercell characteristics with a rotating wall cloud just to our south, the forward flank of this storm started to hit our location with small hail falling, the Supercell had already started to turn to the right and ride along the warm front, so we set off east back the way we came and core punched the Northern part of the storm, near Victoria just to the east of Russell we caught sight of the action area to our south and it was here we witnessed our first Tornado of the day near Gorham, a Multi Vortex Tornado with incredible rotation. We followed this Supercell east towards Russell but it soon became clear that it had crossed over the warm front, more Storms were forming to the south along the dryline near La Crosse, so i made the decision to blast south and then west towards 3 more Tornado Warned cells. Along the way we took a west road which was loose shingle, as we approached Watson and a tarmacced North to South road I blew my back left tyre and we were stopped in our tracks for about 30 minutes whilst the tyre was changed, it was here we had some amazing luck as a Supercell formed about 10 miles to our West and as we had just finished changing the spare a Rotating Wall Cloud was visible. Within 10 minutes this Storm produced our 2nd Tornado of the day just before Sunset, a perfect Cone Tornado backlit by a vivid orange sky and setting sun. We left this cell at sunset and noticed a huge Tornado warned cell near La Crosse, reports were coming in of a large Stovepipe Tornado on the ground with this Storm which was crawling along at 5mph. South we went and then west along Highway 4 towards La Crosse. We cut this Storm down in no time at all but were stopped in our tracks by Large hail in front of us, so we pulled off the road 1 mile North of Bison and set up our cameras, I calculated we would bareley miss the precip by about 1 Mile, it was not long before the Stovepipe Tornado came into view moving ENE, The tornado sirens were blaring out at our location but I knew this Tornado would not hit our location from it's movement. As the Tornado came within 2 miles another Tornado dropped to our North, we not had 2 and possibly 3 Tornadoes on the ground at once from definately 2 Mesocyclones side by side. These finally lifted but the Storm was not done yet, about 10 minutes later Tornado number 5 formed and touched down NE Of La Crosse, this was a brief Cone Tornado which was on the ground for no more than 2 minutes. I now re-located us further North along farm roads, we did not have to wait long for Tornado number 6, this was the strongest of the lot, a very strong Stovepipe which was moving North West, we drove North and followed this quickly stopping along the way to get some pictures, the storm finally moved into the rain and became rain wrapped near Otis. After all the fun we finally gave up on the day, there were probably more tornadoes to be seen from this Cyclic Supercell but we all agreed on the short hop North to Hays for some much deserved dinner at Applebys and some more chaser convergence where we met up with Pete and Nathan, The Weather Channel and Sean and Brandon from the TIV Team. A remarkable Chase day that will live long in the memory.
Posted by Paul at Sunday, July 01, 2012