We started today in Plainview and the general risk area was quite broad with Eastern Colorado, Western Kansas, and the Texas and Oklahoma Panhandles as risk today, we chose a target of Springfield to Lamar as a target and headed north eating lunch in Dumas. Once again numerous storms fired and it became quite messy very quickly, a Tornado watch was issued for our area but storms were congealing into a mess very quickly, we watched a storm south of Lamar, this was a very weak storm though, a next look at the radar showed another 6 storms firing along a boundary stretching into Western Kansas, i decided to head east and then north towards Holly. At about this time a very strange warning came through from the SPC For a discrete squall line capable of producing a tornado near......blah blah blah. Wtf was a discrete squall line for gods sake ?
Decided to let the line impact us, all the time heading east and into Kansas, once again lightning was great but temperature and dewpoint spreads were just too big ( A trend for 2012 it seems) Game over once again so we stuck with the trying to get some hail route and had a few close lightning bolts along the route to Liberal (Kansas) where we stayed the night. Pictures not much cop today as storms were messy and disorganised. 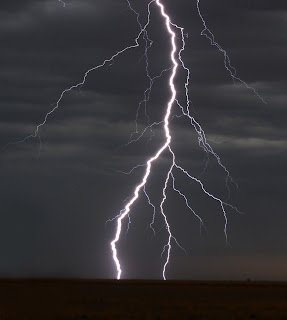