Started the day in Liberal with the SPC Progging 2,000 to 3,000jkg of Cape across Eastern Kansas, outflow boundaries were expected to enhance chances today so off we set eastwards and ate lunch at Greensburg (Kansas). As the 20z data came through one of the biggest changes in SPC History occurred and pretty much scuppered chances for 95% of chasers for today, the risk area totally changed, the expected outflow boundary had not materialised and a new risk for tornadoes was expected near to Woodward, good for us not so good for chasers in Eastern Kansas. We looked at some charts and data and started the trip south towards Woodward. Just south west of Woodward we found the dryline and watching as explosive towers went up and down, the cap looked very strong today as cells trying to initiate were getting pushed back down quite quickly. Finally a Storm managed to go up and gain intensity North west of Woodward near a town called Slapout. This was within 40 miles of us so we set off, it did not take us long to see a very nice sculptured LP Supercell which was pretty much stationery for all it's life, radar was again indicating this storm was struggling and the CAP Was fighting back. SPC Issued a Tornado Watch Box for our area but I just could not see this Supercell lasting any more than another hour. We parked up South of the storm and watched it gradually diminish in size, a tarantula was then the main show posing for pictures, my zoom from the top of the roof of the car did not cut it though. 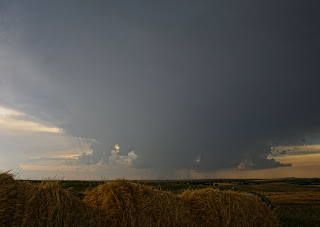 After the LP Shrivelled to almost nothing i noticed a convergence zone setting up further south towards Elk City, so off we went followed by Mr Timmer and Tim Samaras, we managed to find a clear slot and shot some lightning near a windfarm, we ended the day in Elk City with plagues of locusts flying through the air and temperatures of 100f at 2am in the morning, the heat seems to be killing everything this year it seems!
Posted by Paul at Wednesday, July 04, 2012