After over-nighting in Denver it was not long before we were on the road and heading east along I-70 Kansas bound! Storms were expected to fire in the better moisture and where the Cold Front was surging south east today, we stopped briefly for lunch in Burlington and after that it was straight into the action with initiation occurring in extreme North West Kansas. We headed North at Colby and got onto a very nice quickly to become HP Supercell. Another Supercell was forming near Mccook in Nebraska and formed a line of 2 just to our North. After hearing hail roar and shooting some Lightning we blasted east towards Norton, we ran into some radar technical and GPS Difficulties over the next 15 minutes so pushed on and re-started the equipment, unfortunately for us the Supercells had turned hard to the South East with the Cold Front pushing them along as it surged from the North West. Ultimately we got into some Golf Ball Sized hail that was being driven into the drivers side of the car with strong 50-60mph winds. Upon arriving in Norton and after driving in white out conditions for the better part of 15 miles we came across numerous trees and road signs strewn across the road and power out. Another strong storm had initiated to our South and merged with ours over Norton so we took as much cover as we could for about 10 minutes to ride out the bigger hail, I then decided to punch through to the Southern side of the Storm and blasted south, along the way amazing hail fog hugged the road and dust storms were becoming frequent, again we found a few fires in corn fields set off by Cg Strikes. We carried on east and south back towards the Interstate 70 corridoor but by now the storms were all in one huge linear line that stretched from Minnesota all the way to the Texas Panhandle. We decided to stop in Osborne at the Pizza Hut and then made our way through a large MCS On the drive all the way from there to Kearney. Got a few decent Cg and anvil crawlers at the hotel to end the day. 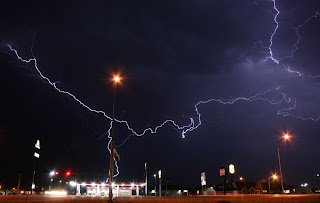