Started today in Cheyenne (Wyoming) and this would be the 2nd day on the trot of the Denver Cyclone Set-Up. After getting suckered into Wyoming yesterday today I was going to make sure to get on the Southern Most Cell of the DVCZ, these usually sit stationery at the bottom end of the cyclone almost like a non moving tail end charlie storm. One thing I was not thinking would happen is a photogenic Tornado near Wheatland in temps and dewpoints of 64/58 and in a position along Interstate 25 just 60 miles from where we started the day. Ho hum onwards and southwards we pushed, the HRRR Model was breaking out a few Supercell's near Fort Morgan and the best parameters looked to be down there from the charts we viewed. As we neared Bennett storms fired a little bit further South so we needed to get down there quick, after a series of bad road moves from both me and Arron we finally got down to where we needed to be and emerged near Simla (Colorado) and it was worth it as an incredible Colorado Structured Supercell sat in front of us. I can only imagine what this thing looked like from about 15 miles back but even from our front row seats at about 3-5 miles it still looked incredible. 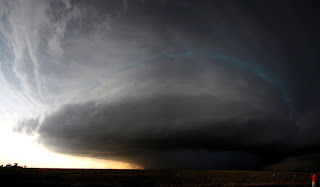 We continued on southwards along dirt roads with the hail core to our north, the structure getting better by the minute, we stopped again about 5 miles in front of the storm and at this time noticed a very big upturn in the inflow winds, these started to scream out of the east at a rate I have not seen since the Greensburg Storm (04.05.07). I knew a Tornado was probably looking likely now and so it happened, a nice clear slot developed in front of us and a big fat cone shaped funnel cloud descended from the wall cloud. Lighting was getting difficult but it was just about possible to see this touch down with the naked eye, this was in the direction of Calhan. 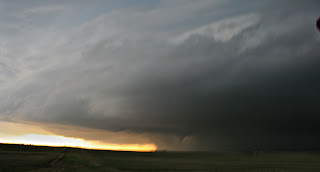 Now knowing we needed to be further north for the next few days we ultimately had to leave this beautiful Supercell and soon as we wanted to try and make Cheyenne as an overnight position, the quickest route would be up I-25 From Colorado Springs to our west through Denver and on northwards. So we made the decision to core punch the thinnest part of the Supercell (4 Mile Core) Both Baron and GR Were showing hail no larger than 2" or Golfballs to be precise, so we went west and started the core punch. It soon became apparant after getting the sporadic golfballs at the start we were in a whole heap of trouble, baseballs started raining down soon enough and our second vehicle smashed their windscreen, the other cars suffered fist sized dents as the hail was the hard variety.

Some Video's below from the developing tornado and hail core punch!

http://forum.netweather.tv/topic/73497-reports-and-pictures-chase-day-28-7th-june-co/#entry2314528
Btw this was an incredibly rare tornado event with this Tornado being an Anti-Cyclonic Tornado meaning the tornado was spinning in the opposite way it should have been!