After our little jaunt into the Mountains on a down day we started the day in Denver with 2 solid Colorado Denver Cyclone days ahead. My chase target today was Wiggins along the I-76 Corridoor, usually in these types of set ups storms form on the front range and eventually go severe later in the afternoon. The first storm of the day fired over Wiggins, we stayed east of this and watched it for about 30 minutes, the storm started to struggle visually and soon enough promptly died out on radar, another huge exploding cell to our North West was shooting up, this was about 40 miles away near the Wyoming and Colorado border near Cheyenne. Our only option for this Storm was 35 miles of dirt roads, we set off and because the storm was moving straight north at 5mph easily intercepted it, we got to the border and sat in front of us was a beautiful rotating Classic Supercell. This was an easy storm to follow, every time the wall cloud moved away we just moved north a few miles and got underneath the rain free base easily. As the storm approached I-80 east of Cheyenne it started to morph into a HP Supercell and structure wise took a bit of a dive, we went further east towards Pine Bluff about 1 mile from the Nebraska border, we then took a north road and caught back up with the Supercell, it very nearly produced a tornado at this point, after about 15 minutes the dreaded cold outflow winds blasted our location and we ultimately knew the game was up on this storm. More storms were firing further south into Colorado so we went back south, we intercepted a great storm at nightfall over Cheyenne but the system was lining out by now, after booking into the Super8 at Cheyenne we were then treated to a constant barrage of thunder and lightning for a few hours from the training line which stretched back to Fort Collins. A decent end to the day but once again those Tubes were being very illusive.

Stitched Pano of the Classic Supercell on the Wyoming and Colorado border. 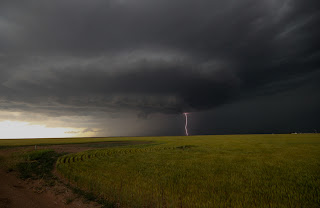 Cg Lightning Bolt over a Cornfield in Wyoming from a Classic Supercell!