After the amazing Ballinger Supercell from the day before it was round 2 of another severe day in parts of West Central Texas. A cold front moving down from the NW Would be the focus of severe weather this day, the tornado threat was near minimal and supercells would struggle to initiate, but there was going to be hail and lots of it as we later found out.

Left Fredericksburg and headed North West to a cell moving south eastwards near San Angelo, we intercepted this quite quickly and followed it east to near Brady, we then had lots of initiation around us and quickly got caught in some golf ball sized hail near San Saba (Texas) In fact the hail was starting to get so big we had to take cover in what I thought was a car wash which later turned out to be a covered drive through area of a Funeral Home, only 2 of the cars could get in so Ian parked his car on what he thought was a concrete parking space under a tree, oooops this was in fact grass and the Tahoe quickly started to sink in the mud. By now drifts of hail were building up and hail fog was creating an eerie scene.

Effectively at that point the chase was over, the storms were quickly scooting away and were pretty much normal thunderstorm types anyway, to be fair the tow truck came quite quickly and got us out of the muddy problem and did not want paying for his 1 minutes work so once again the good people of Texas came through for us.

All in all was a very fun chase. 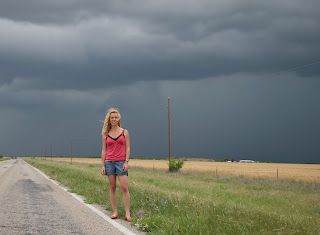 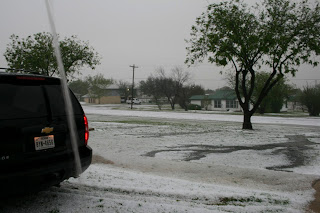 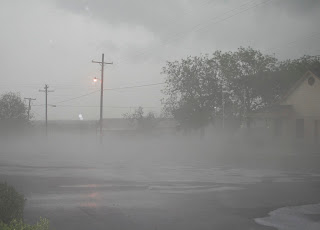