Started the day in Wichita Falls with a pretty good idea on where storms would fire along the dryline in Western Texas. We got onto our first South Eastern moving storm near Abilene, we followed this south and east and left it as it became outflow dominant, new cell growth was occuring to our old storms south west so onwards to the south we went. Just North of Ballinger (Texas) the storm we were just south east off went supercellular and put on a great structure display, also at the same time this storm became tornado warned.

At our location we only had about 5-10 minutes as Tennis Ball Sized Hail started to rain down on our cars so it was time to depart south towards the town of Ballinger. Here we let the storm over-run us and got some dime sized hail and gusty 50mph winds, we then punched back through the core and got back in front of the storm just North West of Fredericksburg. The supercell was now massively HP Dominant and put on some great shelf cloud structure. 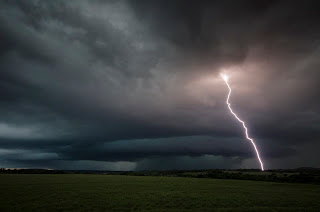 We kept ahead of the storm and checked into the Super 8 Motel and let the storm unleash on us as darkness fell.