After a few down days and messing around on the Farm in Kansas it's straight back into the action today, we started the day in Wichita Falls with a risk of dryline Supercells around the Abilene to Childress Line. So after heading south west and lunching in Seymour we waited along the dryline, a small storm went up and we were straight under it but it really was struggling, in fact the dryline had surged so far eastwards it had dryed the storm out completely and shrivelled it to nothing with 30 minutes, it was still only 5pm and our attention was now averted to an area of backbuilding storms much further east towards the (ironically) Wichita Falls to Mineral Wells to Brownwood line, a Tornado watch was issued shortly after we blasted east to try and intercept the rapidly growing supercells. Our position was about 50 miles to the west but one thing on our wide was the very slow movement of the storms to the SE At 5mph. After driving for an hour we finally started to get visual on our target storm just near Mineral Wells and driving through the town could see that the hail core had done some significant damage with softball sized hailstones littering the roads and pavements, car windscreens were also damaged from the recently passed Supercell.

But no time to stop for the hail as our storm was tornado warned with a rapidly rotating wall cloud noted on it, we went south and then east and caught up with the back end of the cell, noticing the storm starting to hook on radar there was only 1 thing for it, we had to head straight south through the rain curtains and hook area to see a possible developing tornado, we did this and emerged just near the I-20 Interstate, upon going under the bridge and turning eastbound there she was in all her glory, a beautiful tapered cone tornado sitting over the town of Milsap. 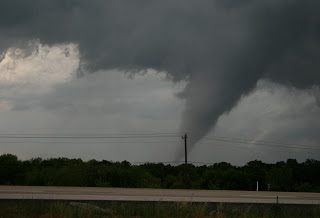 The tornado was on the ground for about 12 minutes before it lifted and the new occlusion was occuring off towards our east near Weatherford, it was here we saw our 2nd tornado of the day, a multi vortex tornado (Not quite getting the wedge tornado done) but a very definiate touchdown from our location.

We now had to head south and east but the road options were very bad for us, we did see the start of the Grandbury EF4 Tornado that unfortunately killed 6 people and injured dozens, we even had to core punch back North East and then come back south to be within 1 mile of the now huge wedge tornado in front of us, power flashes were in front of us on the road in now darkness and signboards along the road were being ripped to shreds by the RFD Winds. This was 1 hook area I was not about to punch through so we played it safe and retired to Glen Rose for the night shooting anvil crawlers until midnight.

A very good chase for us with 3 Tornadoes but sad to hear of the loss of life in that small town.
Posted by Paul at Thursday, May 23, 2013