This was almost a carbon copy day to the 16th but a little further east and a slightly better chance at a Tornado today. We had lunch in Ogallalla and headed westbound towards Kimball.......Again!

Small storms and lots of them were vying for supremacy for a few hours so it was the waiting game. Finally 2 Supercells sorted themselves out near Sterling and Brush so it was south we went for a hopeful intercept, along the way both Storms became Tornado Warned and seeing as we were on the North West side an intercept would be quite tricky, amazing Mammatus filled the whole sky on our approach to the storm down that same road south from Kimball. 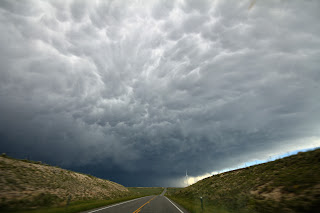 After about 30 minutes we got into a position to see the workings of the storm but from the west and south-west side only, just south of Interstate 70 we saw some very fast rotation with areas of scud clouds being ripped to shreds in an almost tornadic circulation, tonnes of dust and sand were being kicked out of the storm, we followed the storms east towards Burlington and ended the day with a pretty rainbow shot and a view of the chase vehicle for this year. 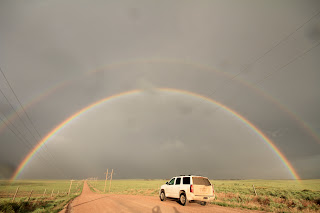