After the great success of the Warm Front day yesterday (14th) we found ourselves with 2 targets today, one in Iowa and the other in Colorado, we had overnighted in Council Bluffs but the decision was made for the huge boring blast across Interstate 80 towards Colorado and hoping storms would hold off until the early evening, also the next few days looked like classic high plains chase days and some upslope magic.

After driving for what seemed like an eternity we approached the intersection in Western Nebraska where the I-76 & I-80 Branch off in different direction, some storms were already rolling into the Western Nebraska Panhandle from the Cheyenne area so we went west towards Kimball and intercepted some storms that were on a south-eastwards heading, this road would become a much used road over the next week. The Supercell on its approach was on a weakening, pulsing stage and did not look that great so we got just east of it and let it nearly over-run us, I say nearly because at the most crucial point we heard hail roar above our heads and it was clear this storm was going for one last push and almost at once some golf ball sized hail started to hit the car, we headed south pretty quickly and got out of the core, others who came past us were not so lucky with numerous cars suffering cracked windscreens driving past us. Upon reaching Stoneham we looked back and saw some pretty decent structure on this LP Supercell which was about 10 Miles to our North East. 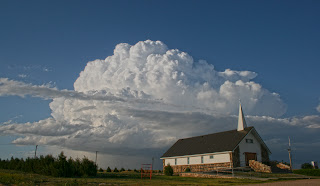 We followed this storm towards Sterling where it was in its final throws of the day and was losing all radar reflectivity, it gave us one final show whilst we were eating dinner with that classic flying saucer dying LP Supercell stage. 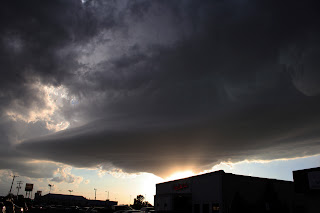