Started the day in Sterling and knowing that my good friend Dave Ewoldt was in town and was chasing this risk it was too good an opportunity to miss when we arranged to chase together. Dave has been chasing in the USA For nearly 32 years and he also mentored me in the 2008 Season, when an opportunity like this turns up you grab it with both hands as the chance to learn even more on a chase day is too good to pass up.

His target of Ogallalla was an inspired choice, upon reaching there the first towers to explode and break the cap were literally 5 miles SW Of this location, even then Dave was not happy about heading south to take a look at this already Supercell. The better risk for tornadoes would be further north near a South-Westwards moving Outflow Boundary and any storm that goes up near there and crosses that boundary would have a much better chance of going tornadic (And so it did as we would later find out with a Tornado near Hyannis)

We went south and east to the small town of Madrid and watched the Supercell morph very quickly from a Classic Supercell to a Massive HP Supercell Hail Machine, at the point of the following picture it was spitting out 4" Hailstones. 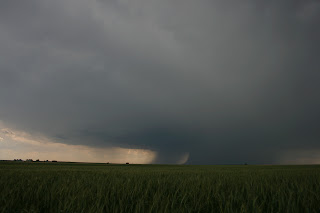 We were also watching a line of mushy storms moving North East from Eastern Colorado towards out storm and worried they would interfere with ours. At once Dave said lets go and head north, a quick look at his radar confirmed the Outflow Boundary had already interacted with a storm SE Of Chadron and already dropped a tornado almost at once. A few storms in between that storm which was 100 miles to our north were moving towards the outflow boundary so it was north back towards Interstate 80 we went, our target storm was near Arthur, we got to it in quick time but as soon as this reached the boundary it promptly died.

Another healthier looking Supercell about 30 miles further north was the next target, this had some cracking LP Supercell structure but once again this struggled as it moved east, something just was not right now which was earlier.

Onwards we kept chasing the storm towards North Platte but apart from putting on a little bit more structure ultimately the storm was in its dying phase, so we cut off the chase after trying to get Ian and Dave hit by hailstones (That failed as well LOL) The Storm literally vanished within 30 minutes.