3 days to go for the 2013 Season and it was nice to finally get rid of Colorado and Nebraska for a little crack at the Dakotas. Our chase target for today would be on or near the triple point which was pretty much bang smack on the South and North Dakota Border due north of Pierre.

The journey up was eventfull with construction slowing us down for a good 30 minutes, we finally got onto a very nice looking Supercell about 15 miles into North Dakota that was sat stationery and did so for about 4 hours, we took a bit of a risk on an unpaved road and ended up literally under the rain free base of this storm, at once the rotation started to crank up and it looked like someone had put a x10 Timelapse on a video recording, funnels were dropping everywhere and it seemed like the Supercell had 2 different mesocyclones within its base.

To our North we were all quite shocked to see this over a hill, the giveaway for it not being a Tornado was the motion was static and it was just a big area of scuddy clouds being drawn up into the leading edge of the gust front, but it sure looked pretty anyway and would have fooled quite a few people into a report. 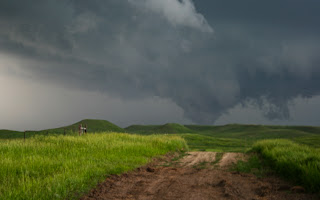 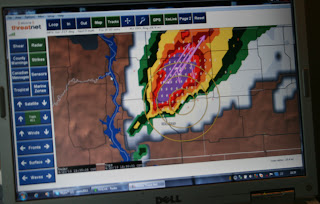 With the storm still dragging in pretty impressive inflow it still had a decent chance to produce, we went east about 5 miles and found a high point and looked back, another 3 funnels were observed to our west and with the storm now edging Southwards we knew it was only a matter of time until we would be back into South Dakota again. 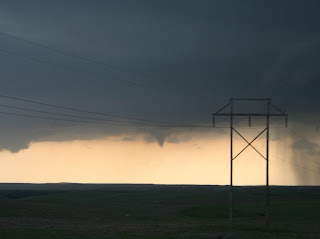 With light and day waning and with the Storm now becoming quite a HP Outflow monster it was time to depart and head back south for our last few chase days which were looking like Colorado, Wyoming and Nebraska again. 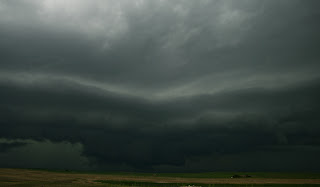 LCL's were dragging the ground in the picture above, we also had readings of 82/72 on the t/d spreads. Spent the night in Wall ( S Dakota) well placed for the next few days.
Posted by Paul at Wednesday, July 03, 2013