Day 4 of the Arizona Tour saw us targeting the Mountains east of Phoenix and so it was a small drive east on Highway 60 into the fabulous scenic roads and elevation towards Superior and Globe. Storms had already fired down towards Safford once again and so we went east to intercept them and plotted that we would near Superior. When we got there we stopped at a favourite little viewpoint just outside of town near the small regional airport which had good views over the small town and mountains behind. The storm looked nice visually with a decent gust front and hail core, as it progressed off the mountains a few of our group bagged some very nice close Cg shots (The closest was about 1/4 mile away in front of us) 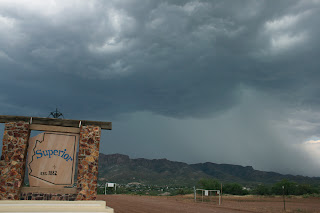 As the rain core approached us we retreated about 2 miles further east to get some of the structure of the now dying storm. 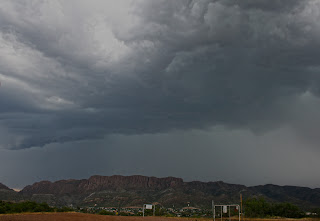 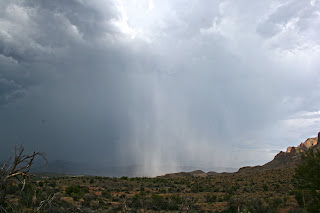 After this point we went south towards Mammoth and picked up another few storms but they were so grungy they were not even worth taking pictures of, we then did a complete loop and followed Interstate 10 back towards Pheonix for an early night as all storm dissolved by about 6pm.
Posted by Paul at Tuesday, September 03, 2013