After a weekend that promised much but delivered very little from the Hype of a Tropical Storm near the Baja Peninsular and only weak non picturesque storms Mondays offerings were a lot better.

We headed down towards Tucson as this was where the best parameters were, and as we were down there early we decided to visit Tombstone as this was on everyones list of laces to visit, the plan was to visit Tombstone and follow Storms northwards back towards Phoenix, what we did not envisage was just how strong the storm sitting over Interstate 10 near Marana was going to be and the subsequent events that followed with long delays due to numerous multi vehicle crashes in the resultant northbound Haboob and very heavy rainfall (2" near Maricopa)

Wild West Town of Tombstone Below After a quick lunch of Buffalo Burger in the Crystal Palace Saloon I looked at the radar and knew we had to hot foot it North to Tucson and then Northwards towards Phoenix, add in a Border Patrol crossing and you get the point of a very slow progress.

When we got to Tucson a very strong storm was still 50 miles to our North wreaking havoc along our planned route but this little Monsoon storm was very pleasing on the eye near Mount Lemmon. 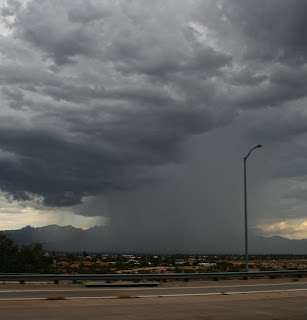 On we pushed and after getting held up for an hour south of Maricopa we went the slow way through Chandler and then northwards towards the east side of Phoenix, on route in front of us a fresh updraught went up which went crazy spitting out violent Cg Lightning every 20 seconds, the unfortunate part of this was not being able to find a decent vantage point to capture this amazing lightning, we finally got a stopping point right at the very eastern end of Mcdowell Road and by the time we got set up the storms had congealed into a North Westwards racing MCS. Que grungy structure again but at least some dirty dusty lightning was captured. A nice end to a very frustrating day and we were only 2 miles from the Hotel which was nice for once. 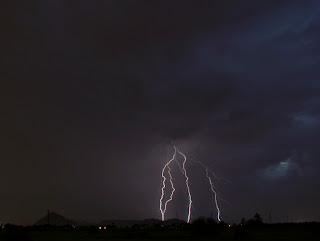