Todays risk looked pretty simple on the Models with 2" of Precipitable Water way off to the South West of Phoenix between Aja and Yuma, we would ultimately end up chasing just 25 miles from California and then having to hot foot it back to Phoenix at dusk.

After grabbing some lunch we headed west from Casa Grande along Interstate 8 towards Yuma and San Diego, a system of storms was already heading South Westwards from Tucson towards Aja and we ran along the top of these to the North along a fast route westwards. We stopped briefly as parts of this system went Severe to our West and got some structure shots. 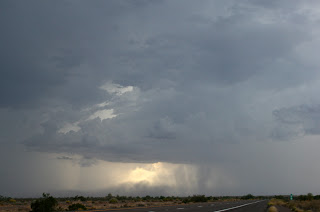 We plugged on and somehow ended up just North West of the line of storms near Yuma, the main thing to note about chasing this far south west is just the amount of dust and sand that gets flung about by these storms, it really is not nice and you can barely see any lightning with all the dust contained around the system. We witnessed numerous Haboobs and Camera work was tricky to almost impossible. At around sunset the colours looked almost unworldly with yellows, oranges and purples. 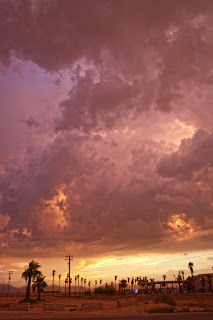 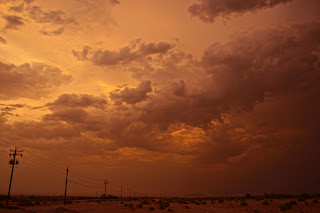 Being so far South West worried me as Storms around this time started to erupt around the Casa Grande to Phoenix areas and were becoming stronger, we gassed the car up and plotted an intercept around Gila Bend which we could make in about an hour, what we did not expect were fresh updraughts going up along the way and tempting us, some of these were spitting out incredible Lightning, one such bolt hit the same spot 9 times and almost blinded us along the Interstate. Onwards we went until the Lightning became too much to resist and we pulled over at the town of Dateline to shoot some Cgs. When this dried up we pushed east once more and stopped just West of Gila Bend to set up for more lightning and we could also now see the Phoenix Storm 24 miles to our North from this point. 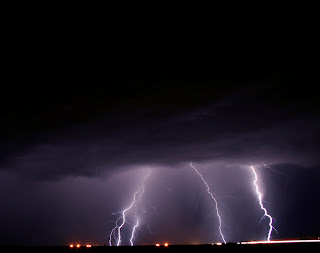 After this things seemed to die down a lot and we met up with a couple of local chasers at the Shell Gas Station in Gila Bend and talked about the days chasing whilst shooting the last fading anvil crawlers.
Posted by Paul at Tuesday, September 03, 2013