Started the day in Sioux City (Iowa) on the west side of the Missouri River. Today was one of the days I had been looking forward to for quite a few days, moisture had been put in place for quite a few days and expected dewpoints for today along the warm front should easily reach the mid 70f range. Overnight Elevated Storms were ongoing when we woke up and these were moving east towards Northern Iowa and Southern Minnesota, these storms would also be a vital cog in today's risk zone leaving an outflow boundary in their wake.

Todays Set-Up was one that chasers drool about, A Stationery Warm Front somewhere just North of the Interstate 80 Corridoor and an Outflow Boundary draped from North Central Nebraska down towards the Omaha Area in SE Nebraska, 5,500jkg of Cape and expected temperatures of 85f with expected Dewpoints around 75-77f. Shear was abundant along the Warm Front and if a Storm could develop and stay discrete and ride the WF & Outflow Boundary we could be in for a Big Day.

After heading away along Highway 20 from Sioux City my target area was starting to become very clear, ample clearing to the South West of the Overnight Complex near Grand Island had me leaning to on target area which was Norfolk (Nebraska). This would be within the Warm Front as it was lifting northwards and we even saw the Warm Front head North over that Town at about 2pm (CDT) Whilst having lunch. It was also be just in front of the Outflow Boundary draped just to it's east.

At about 245pm the SPC Issued a PDS Tornado Watch and some showers were starting to get their act together near Ainsley, the first attempt at a storm lasted about 25 minutes before shedding it's anvil over Norfolk, then at about 3pm three seperate Updraughts exploded just North of Columbus and congealed into 1 large Supercell travelling towards Stanton. The Chase was firmly on and with a Storm initiating in the perfect spot for the Warm Front and Outflow Boundary I had a mixture of excitement and a daunting fear for what towns would lie in this Supercell's path.

I took Highway 275 eastwards and stopped at the intersection of Highways 275 & 15 just north of the town of Pilger where we got a pretty good first look at the Supercell heading North-East towards us, the Lightning was some of the most impressive I have ever seen and the audible sound of the thunder was like something I had only heard on the Moore Day from 20th May 2013! The Storm was already tornado warned and started to look incredible on radar. We did not have a great view so I re-positioned us a little bit further east just North of the Town of Wisner where we got an incredible view to our South and West from probably the highest point in Nebraska (It certainly felt like it anyway)

Off to the Southwest the First EF4 Tornado in progress was still visible before becoming rain wrapped North East of Stanton, but we had our first Tornado of the Day in the bag, albeit at a long distance but it was clear to see. We stayed at our position and watched as the Supercell occluded and a new strongly rotating wall cloud was coming into view and much closer to our position, the Storm was clearly riding the warm front now and was starting to head more ENE In direction.

From the look of the wall cloud it was only a matter of time before another Tornado was about to touch down, we started taking some small hail but it was still the lightning that was the biggest danger, we were joined by a young lad who was the spotter with the volunteer fire service based at Pilger who asked us if the sirens needed to go on at Pilger and Wisner to which I shouted really sternly "YES Get them On and Keep them On" Around this time a few other chasers pulled up along this small road along with the Sherriff of Mason County who was looking very worried. About this time we also tweeted a picture of the developing tornado to NWS Omaha.

Video Below shows the Sound of the Thunder as the Pilger (EF4) Tornado was just getting started.

The next video shows the Tornado started to become a large cone Tornado East of Stanton and moving directly at Pilger, notice the local radio station in the car at about 1min 20 seconds saying if you are in Pilger take cover now as it will be expected at 415CDT, You can also hear the sirens from both Pilger and Wisner in the Video Clip.

A Picture from when the Tornado was starting at about 405CDT 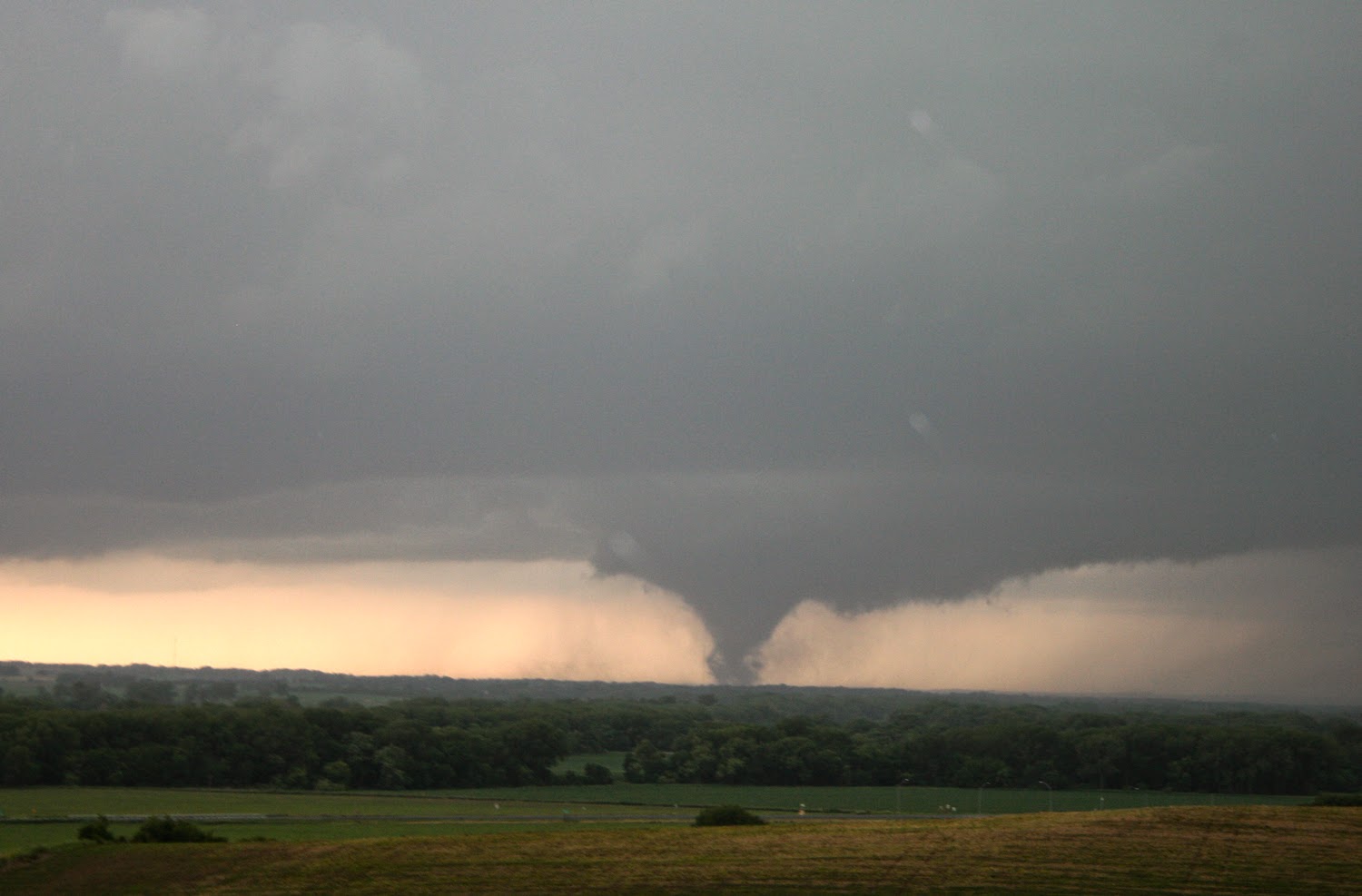 Just after the above picture was taken another wall cloud to the South of the picture above started to rotate violently and it was looking like another Tornado was going to form at any minute so I re-positioned us at this point about 2 miles further east and stopped once again. And it was a good job I did as what happened next had me open mouthed in amazement at what was unfolding before us, another Strong cone Tornado touched down at exactly the point where we were sitting and started churning it's way Northwards with the now Wedge still in progress some 2 miles to it's west, what was unfolding was a once in a lifetime chase event. Unbeknown to us in the picture below was the town of Pilger was taking a direct hit and unfortunately 2 lives would be claimed at about this point in proceedings. 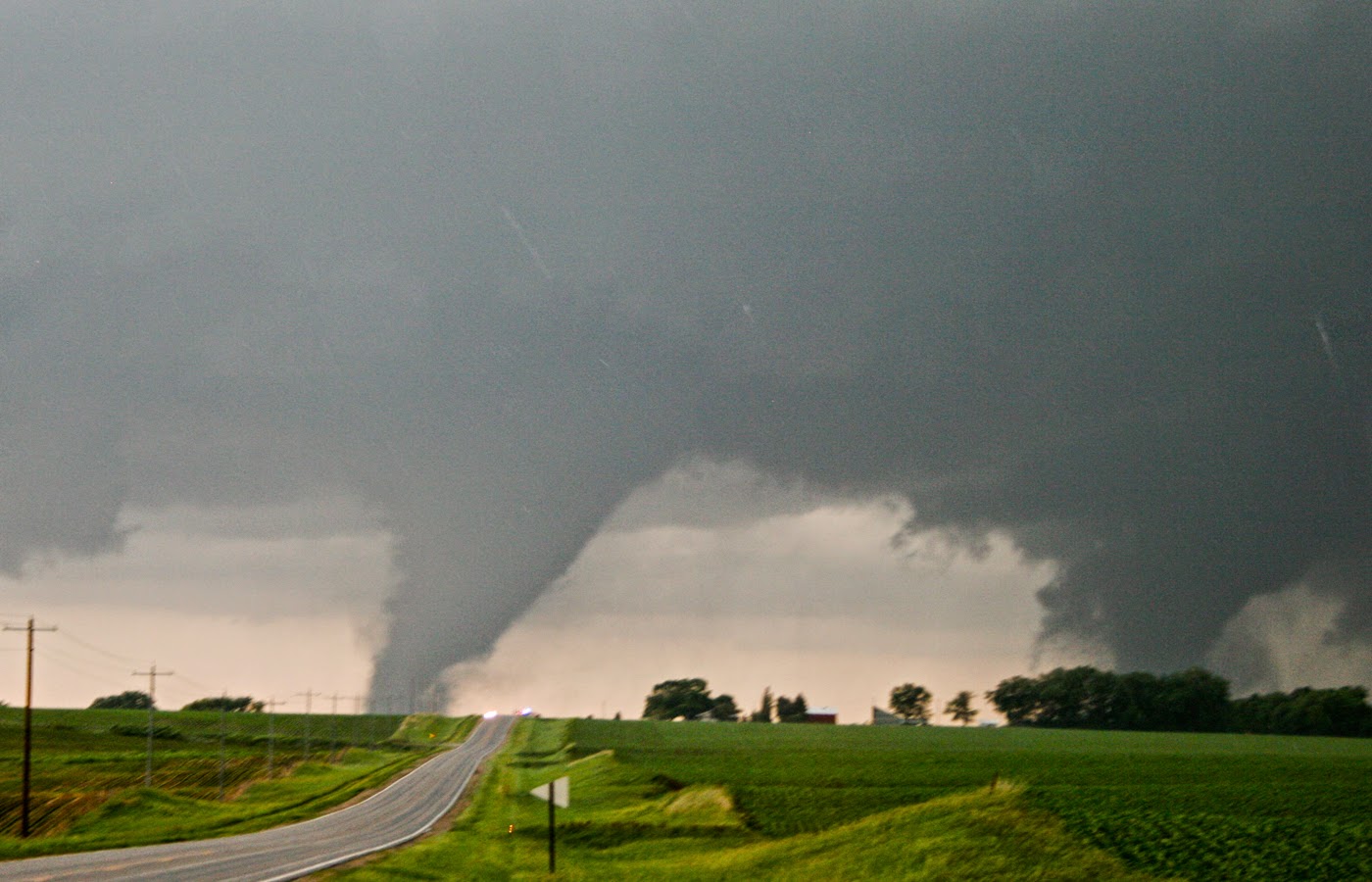 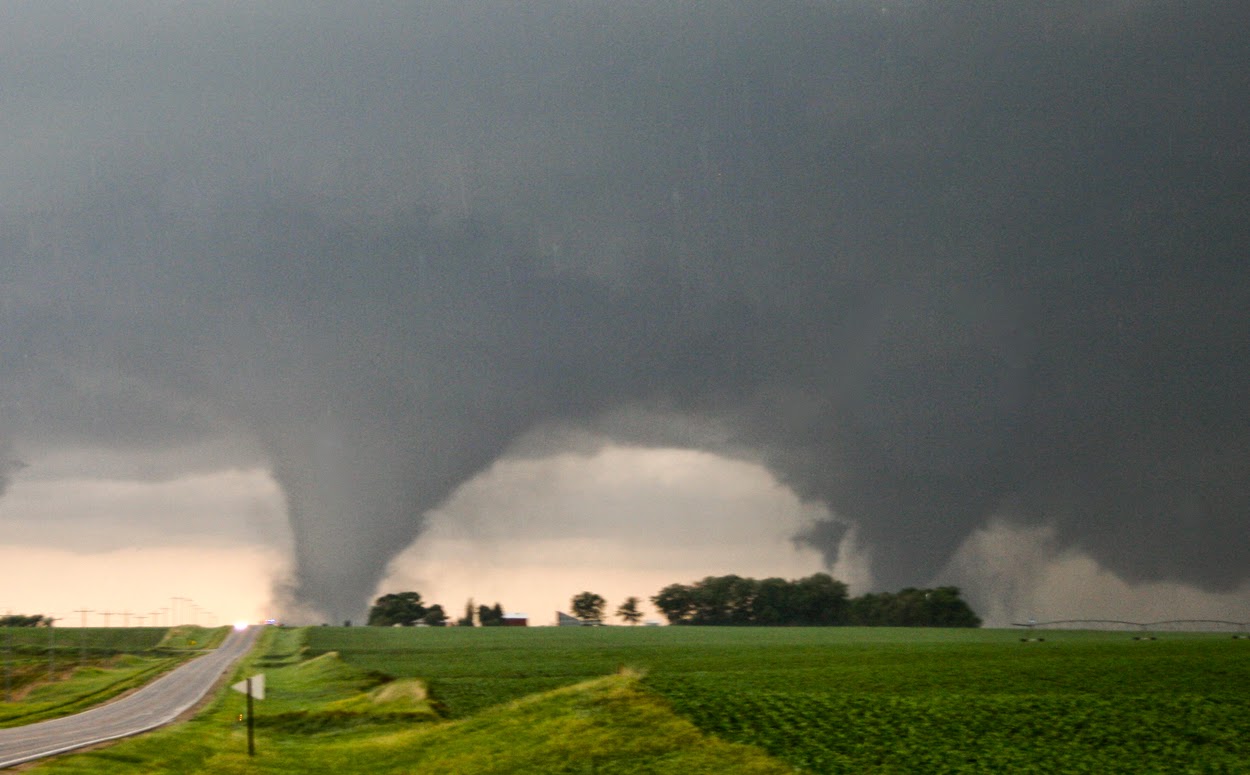 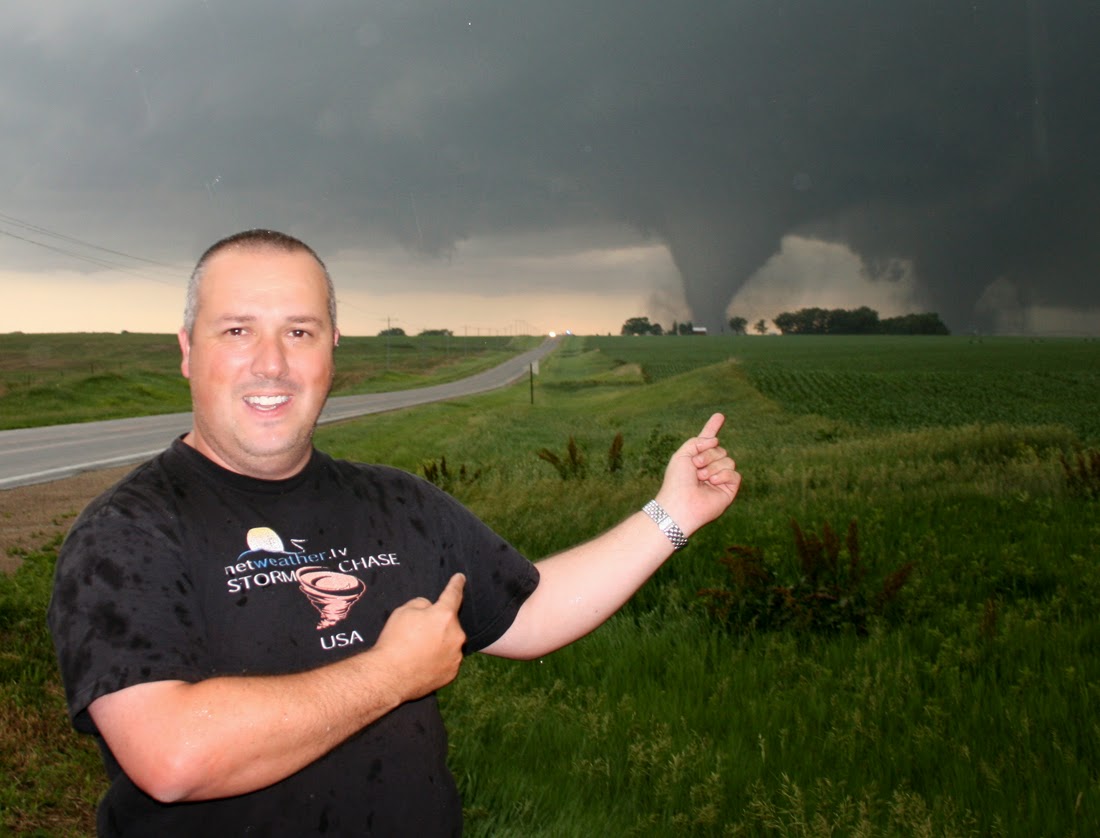 The other thing about this Supercell was the insane structure it had, with 2 clear Mesocyclones in the same storm system. 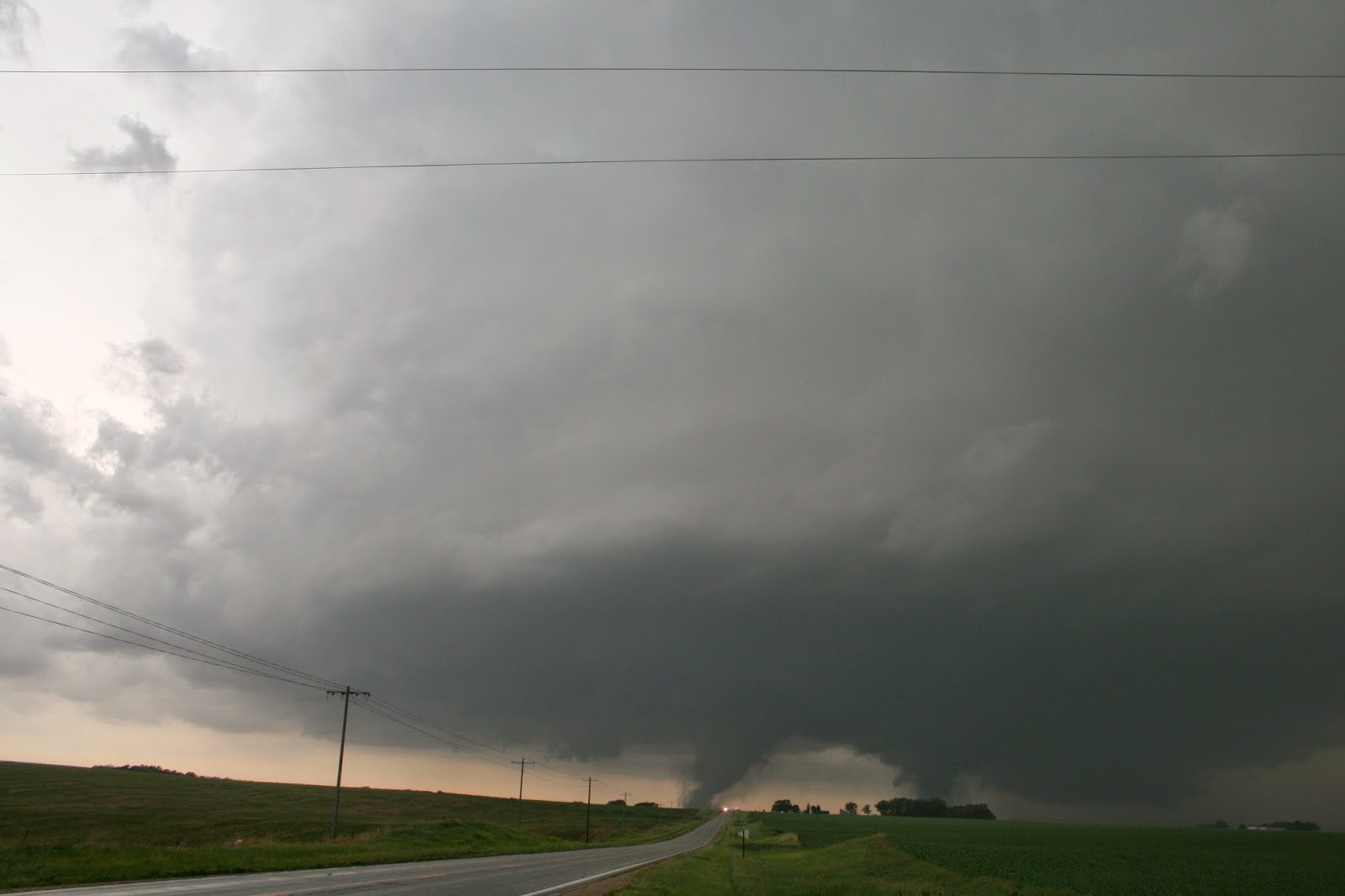 We continued to watch open mouthed at what was happening a mile or so to our West feeling in awe at the power of nature at this point, a field of corn produced an amazing foreground to this pair of monster EF4 Wedges churning away Northbound. Some video and pictures below.

Some Pictures of the Nebraska Twins 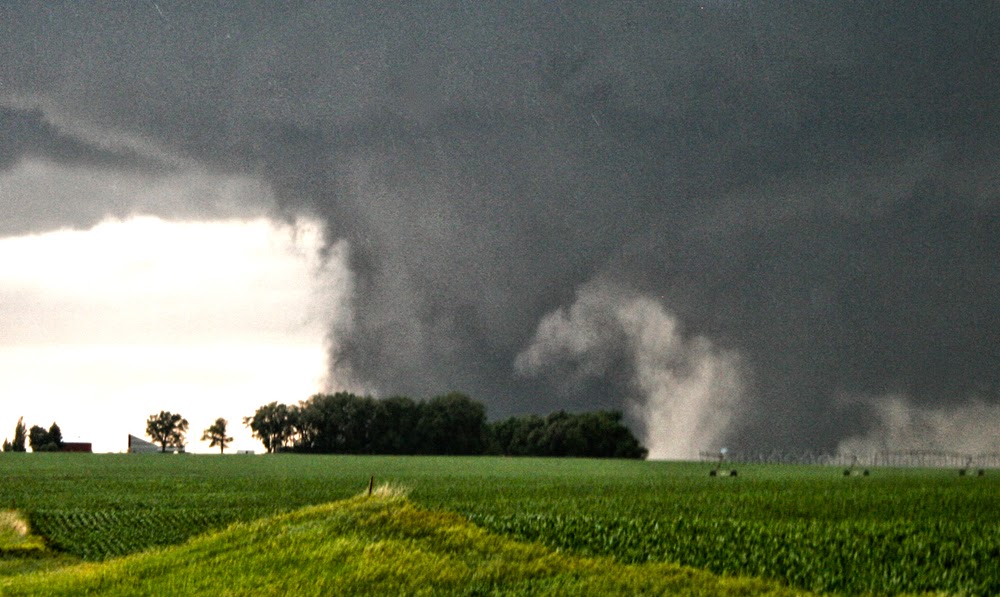 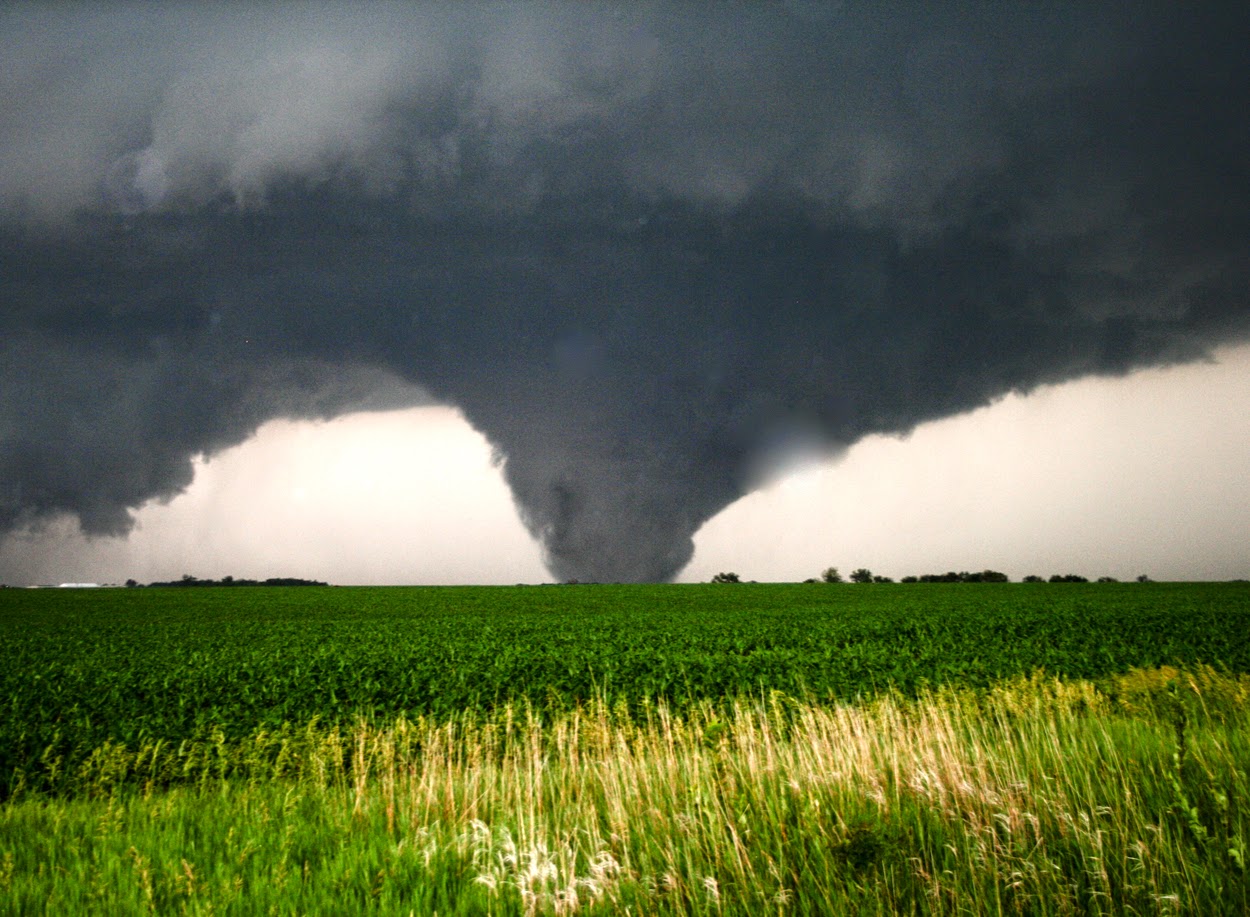 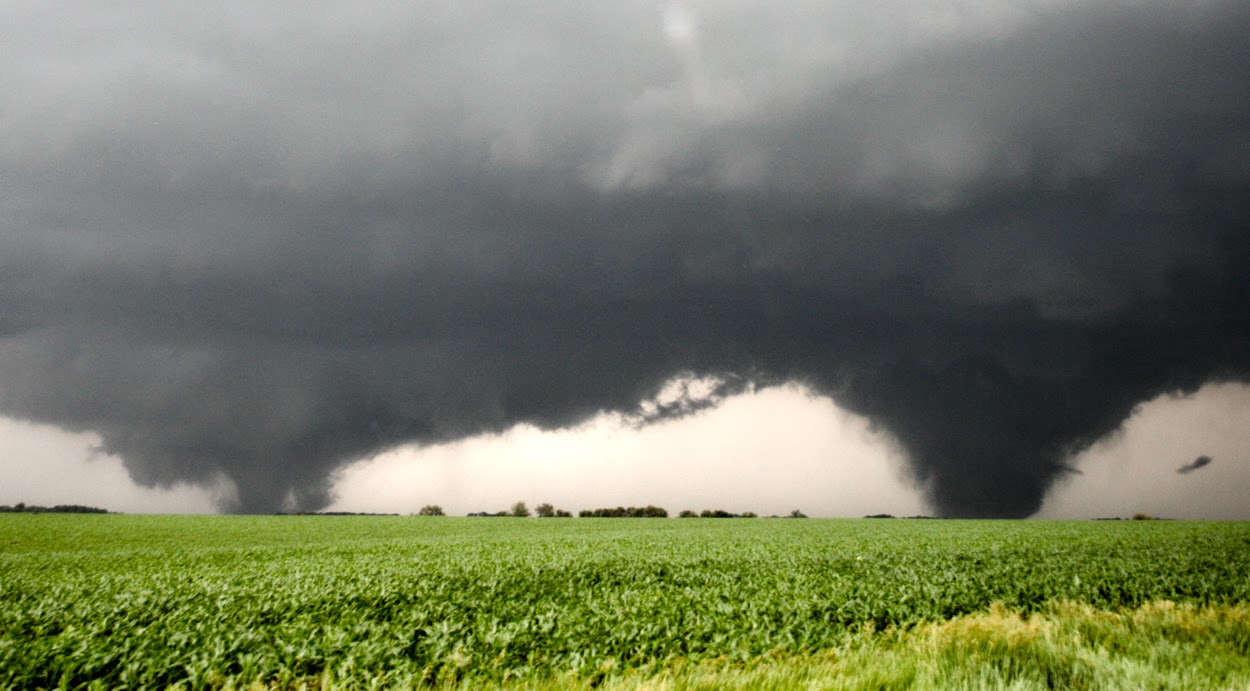 A little after the last picture above the tornadoes seemed to crash into each other and became rain wrapped so we needed to head further north and follow the cyclic supercell in case more tornadoes formed, we took our road east for 5 miles and then headed north towards the town of Wakefield. It was becoming clear a new occlusion was occuring and we were again minutes from another very large wedge tornado forming, about 3 miles south of Wakefield the tornado touched down into a large wedge but once again another satelite tornado was observed to its south, this time the secondary tornado was much smaller than the previous twins and quickly skipped into the parent mesocyclone and dissipated, Wakefield was also spared a direct hit with this tornado staying over mainly open farmland and luckily destroying a few barns with no loss of life. This would become the Storms 4th EF4 Tornado of the Day. 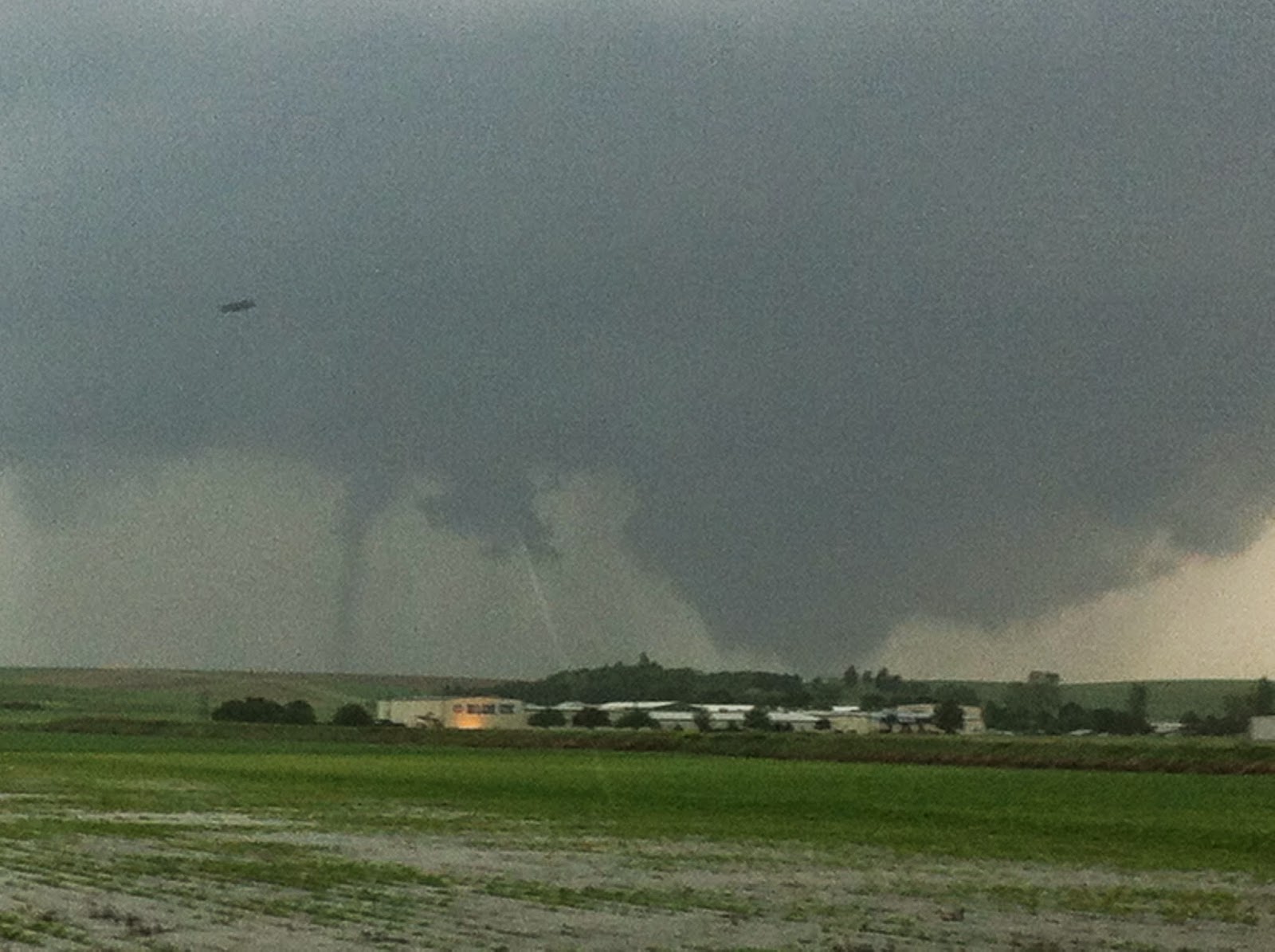 After watching this Tornado dissipate we pushed onwards towards the Town of Hubbard which had tornado sirens screaming out as we passed through, we carried on towards the town of Jackson and watching a spinning wall cloud above our heads on winding roads towards Sioux City, numerous funnel clouds were dancing around in front of us until finally we had our 7th Tornado of the day touch down north of Jackson near the Nature Reserve, this was a very brief tornado on the ground for no more than 2 minutes. 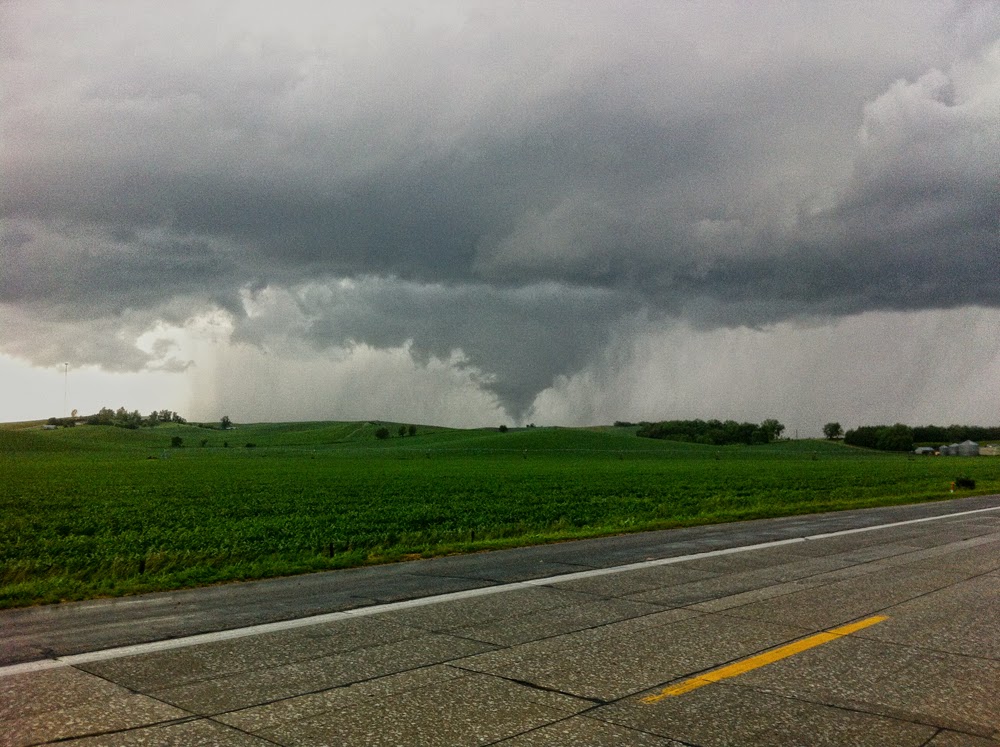 Soon after this shot was taken it became obvious the Storm had crossed the Warm Front and was getting ingested with colder air and literally fell apart in front of us, we then headed back west towards Ainsley where another Supercell had broken the cap along the dryline and had a large tornado on the ground, we were nearly 100 miles away though so could not make the storm in time before darkness and elected to end the day in Columbus (Nebraska)

This will rank as my New number 1 chasing day simply for the fact of seeing incredible events like 2 large violent EF4 Tornadoes in such close proximity being probably a once in a lifetime event, and seeing as the last time this happened was April 11th 1965 (Palm Sunday Outbreak) I doubt I will be around chasing when I am 91 years old if it is a 1:50 year event.

Obviously the only downside to today was the loss of life, but with warning times around the 15 minute mark numerous lives were saved by chasers getting reports in early and people looking at social media, radio,tv stations etc and if we can keep the warning times to 15-20 minutes many more lives will be saved in the future.