After yesterdays incredible season's best chase day we awoke in Columbus (Nebraska) with temperatures well into the 80's and dewpoints still around the mid 70's. A very volatile atmosphere was still in place and today's Set-Up reminded me somewhat like the Bennington day last year with a Stationery Boundary being the focus for storms, the secondary risk area was Western South Dakota into Montana but we were way off that risk zone for today so it was the Nebraska, Iowa and South Dakota risk area for us. SPC Had a broad 5% Tornado risk from Montana all the way across to Illinois through South Dakota, Nebraska and parts of Iowa and Minnesota, A huge area to pick a target from today, two seperate 10% Tornado risk areas were also noted over Montana and Iowa.

With last years 28th May debacle still on my mind we made our way North towards the Nebraska and South Dakota border area near Vermillion and stopped for lunch, after this we headed back east towards Sioux City and an MD (Mesoscale Discussion) was issued for North Western Iowa and North Eastern Nebraska. Everything looked perfect once again "if" a Storm could break the cap.

At 730pm an area of agitated Cumulus started getting it's act together back the way we had come from about 30 miles North of Norfolk, we were unfortunately the wrong side of the Missouri River and with only a few crossing points we took the decision to fill up the cars and get back across the River and back into Nebraska. There were about 6 areas of precipitation trying to organise and just like the 16th once these rooted into the boundary we knew it would be chase time, we got our first look at the Updraught as we headed South from Vermillion and an LP Supercell was clearly to our south-west, there was so much moisture though that the hazyness from about 15 miles away meant we really had to get in close or visibility would be an issue, the now Supercell was over my only south road option so I took the decision to punch through from the North-East side hoping any hail would not be too big, the other road option would have taken us a good 45 minutes longer having to go SE To Sioux City and then back South West.

We entered the area of precip and only encountered sporadic very small hail and heavy rain and once we busted through this an incredible sight welcomed us to our west with a 1 Mile wide Wedge Tornado over open fields about 2 miles away, it was very close to the town of Coleridge on our Streets and Trips but was thankfully moving away towards the South. We stopped on a farm road and watched this stunning Tornado churn away with incredible structure and Collar cloud above the Tornado.

Video's of when we turned up and Tornado in Progress

Some Pictures of where we stopped just east of Coleridge. 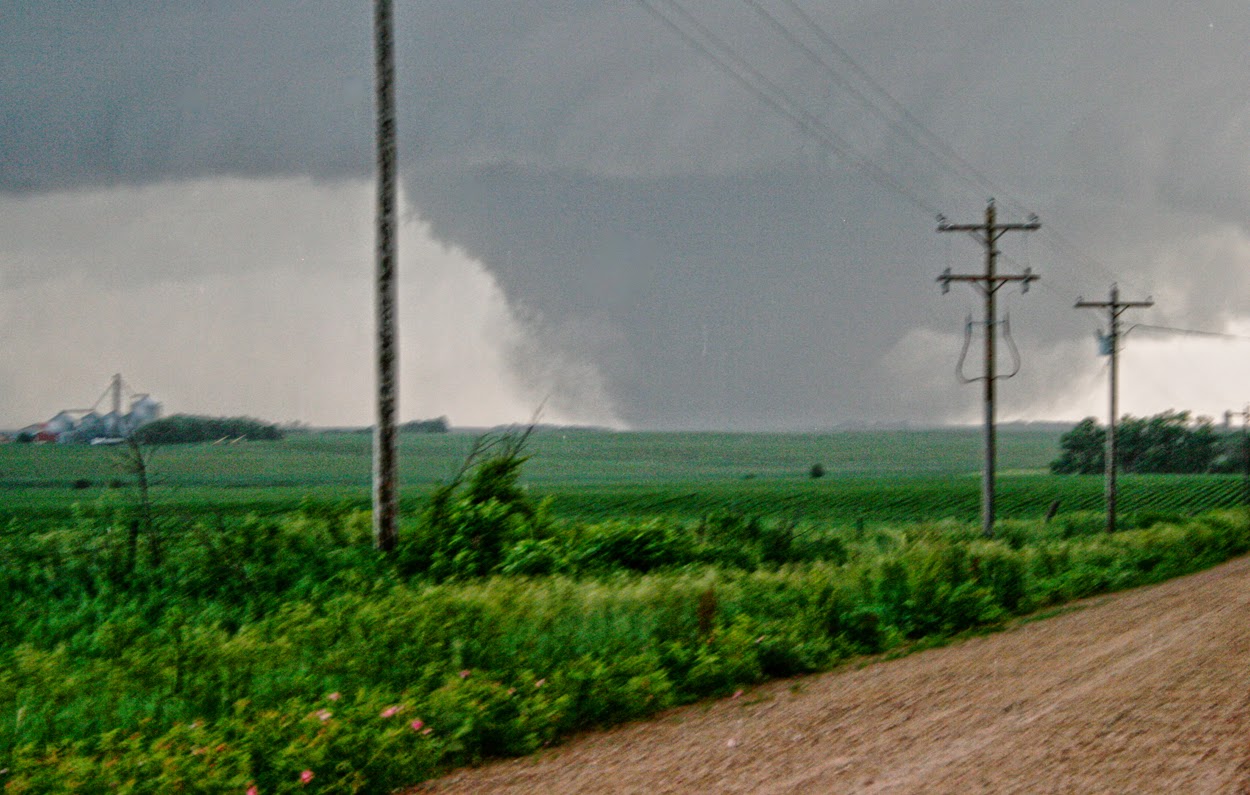 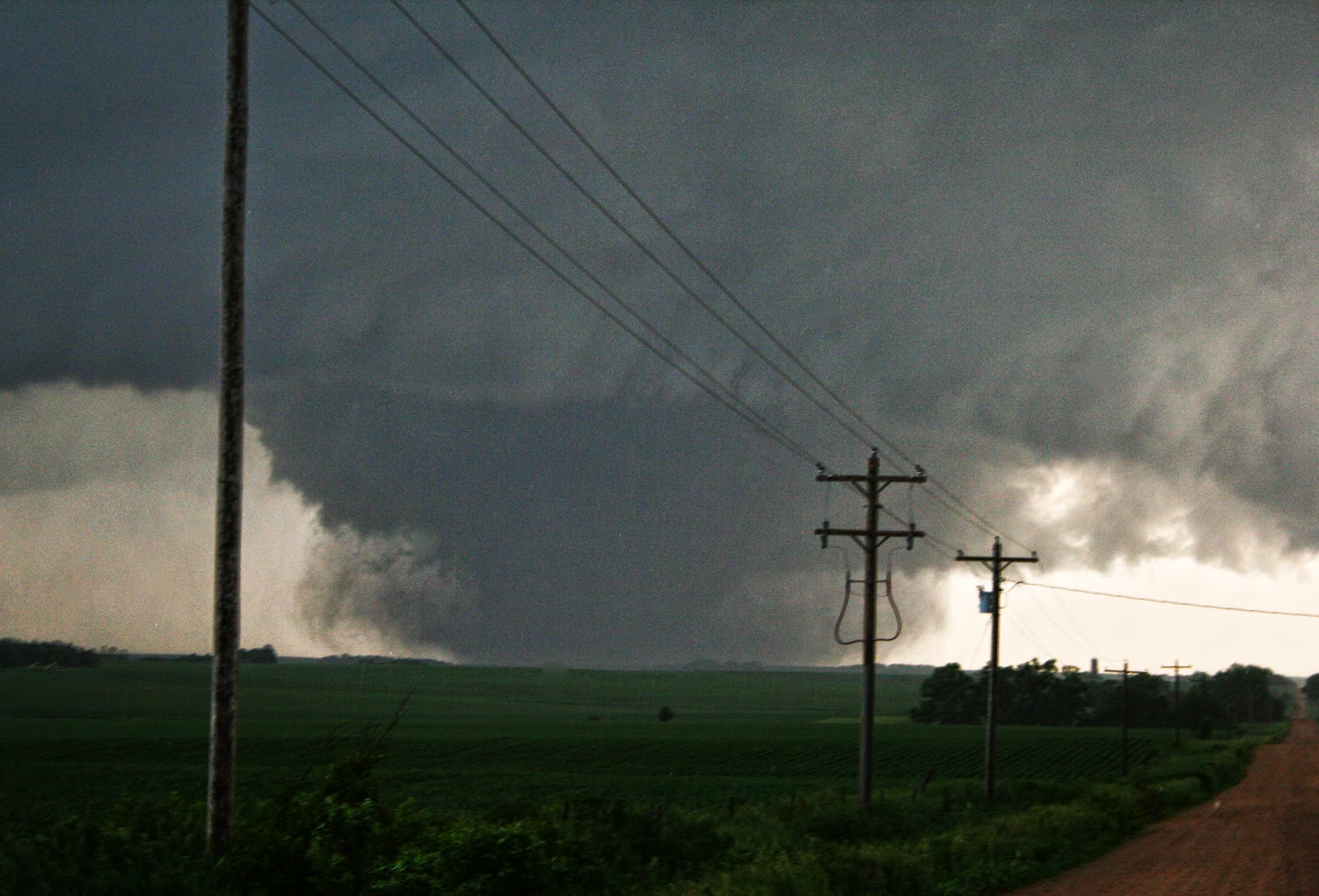 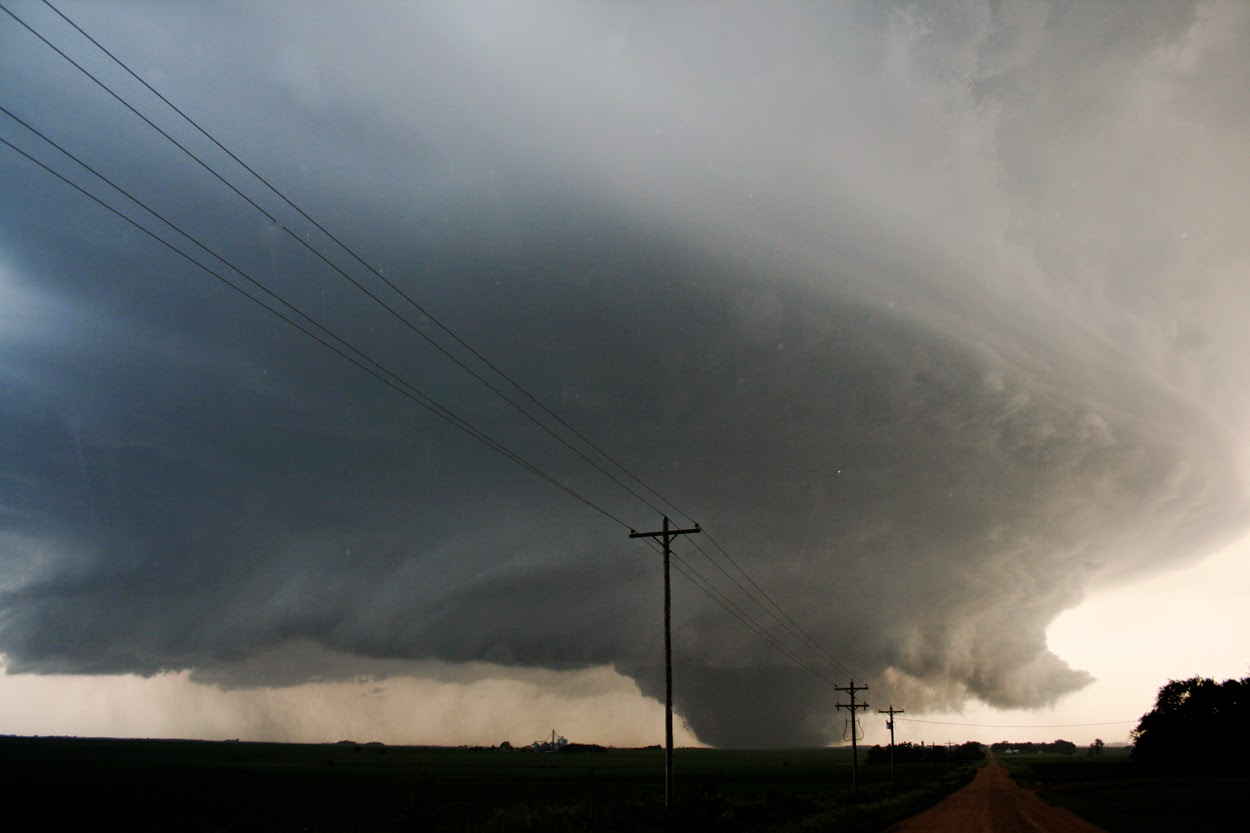 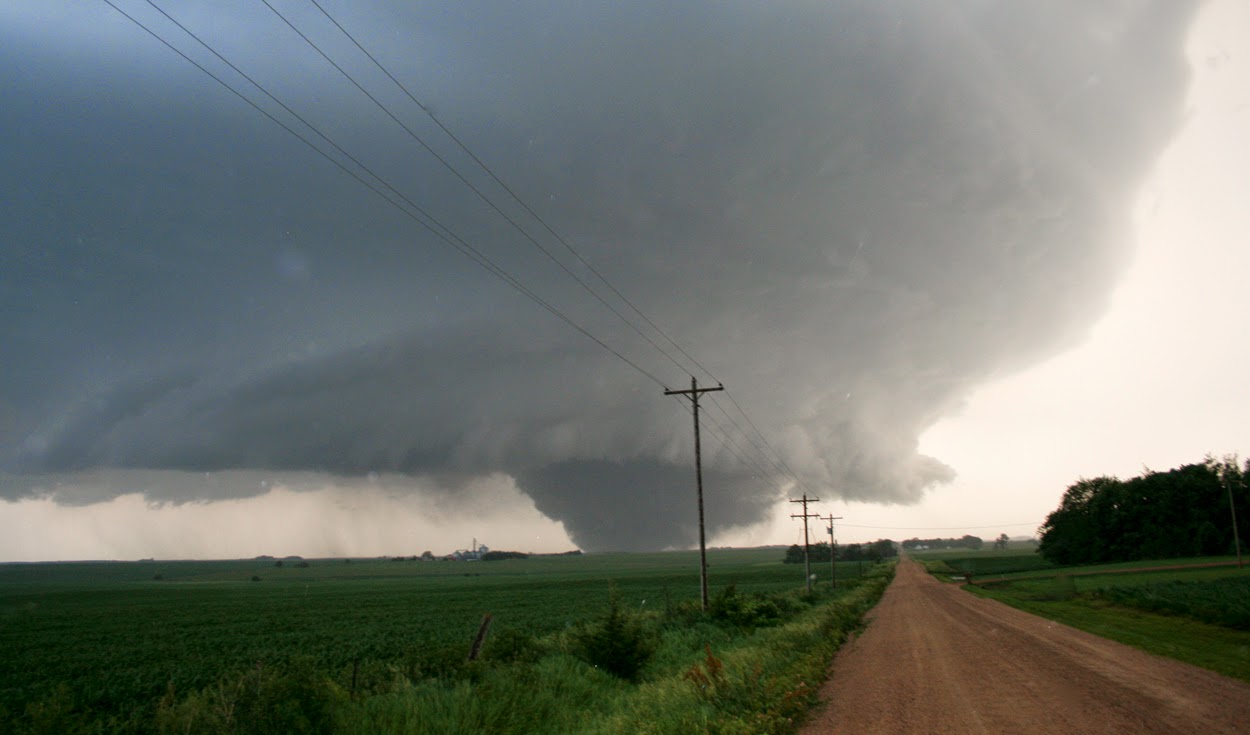 It was once again amazing to see such a large violent wedge tornado under an LP Supercell, shortly after the above pictures were taken the Tornado started to get completely wrapped in rain so we headed south towards Laurel and got onto Highway 20 which went east to west, we went west a few miles and could hear the roar and waterfall sound of the tornado to our North West but could not get a visual as it was still heavily rain wrapped, we then decided to go a few miles south to Laurel and watch the storm move towards us at about 5mph, darkness was now also starting to fall but this was just the start of this amazing cyclic Supercell and she had more tricks up her sleeve with another 5 Tornadoes still to come. The first of these was another wedge tornado with satelite stovepipe next to it on the ground at the same time, I got a decent Iphone picture of this as the lightning illuminated it.
These tornadoes were now moving straight North again so we headed back to Highway 20 and watched from about a mile away, Tornado number 4 was a tall Stovepipe churning away to Tornado number 2's east, whilst this was going on amazingly another cone Tornado touched down about 5 miles further west, meaning we once again had 3 Tornadoes on the ground at the same time again, the radar appearance again was looking like the 16th June with seperate mesocyclones and continous development on the Supercells south-east side, with it being very dark it was starting to get tricky to stay out of harms way with touch downs happening everywhere.

Some Video and a Picture of Tornadoes 2 and 4 in progress at the same time, when this picture was taken another cone tornado was ongoing off to the left of the picture to our North West. 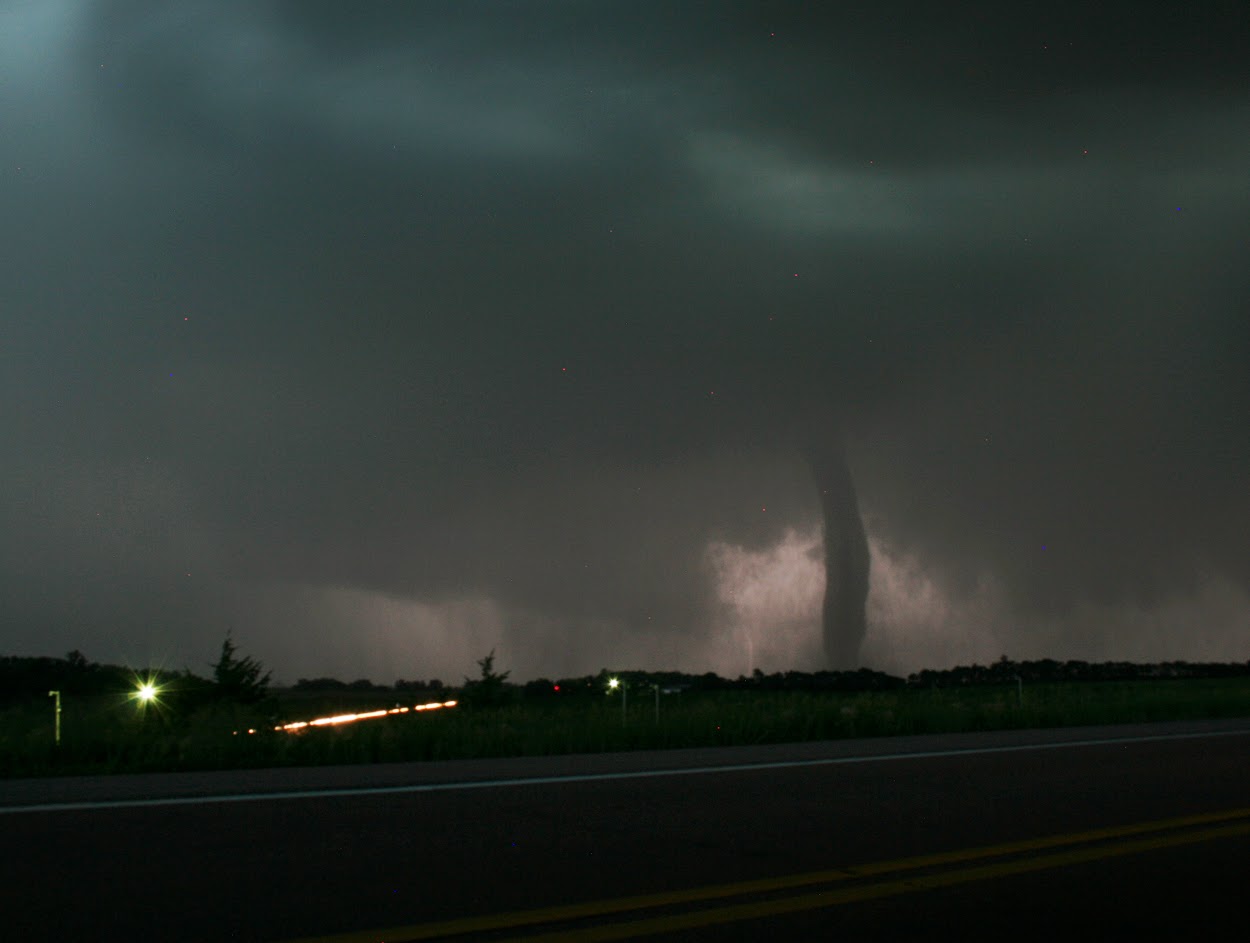 While Tornado Number 5 was brief the last Tornado we saw today was probably one of the prettiest and touched down while 2 other Tornadoes were still ongoing a few miles to our North, this tornado tocuhed down near Dixon and was a very pretty Stovepipe Tornado crossing the road to our east, we watched a few green power flashes as the tornado took out some powerlines down the road from us, so we now had 4 areas of interest from this amazing Supercell Thunderstorm. 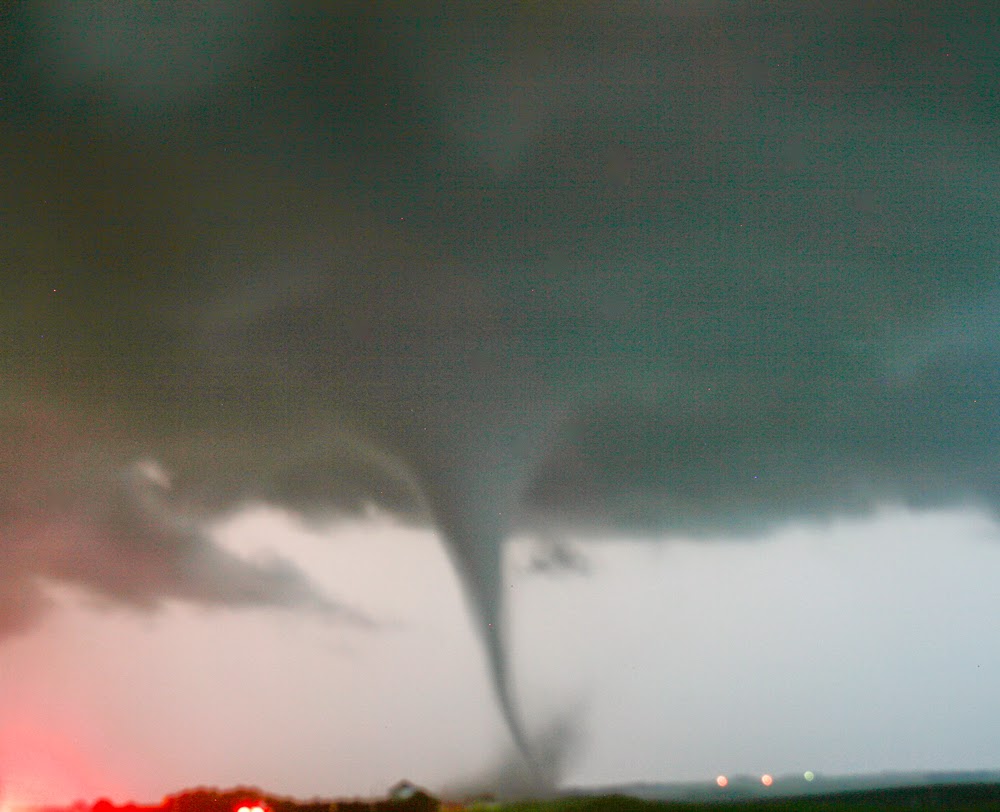 The above tornado was occuring right over our path east to Sioux City so we tentatively crept eastwards after the tornado had dissipated and got east of the storm a few miles to look back at the incredible structure to our west, some pretty amazing Cg Lightning was lighting up this stack of plates Supercell so we stopped and took it all in, to be honest you could have photographed this storm for hours without moving as one thing that struck me was the Storm moving 12 miles in 5 hours just stuck on a stationery boundary eating up all that shear and vorticity.

Picture Below shows the Supercell's structure with insane Cg's that were raining down. 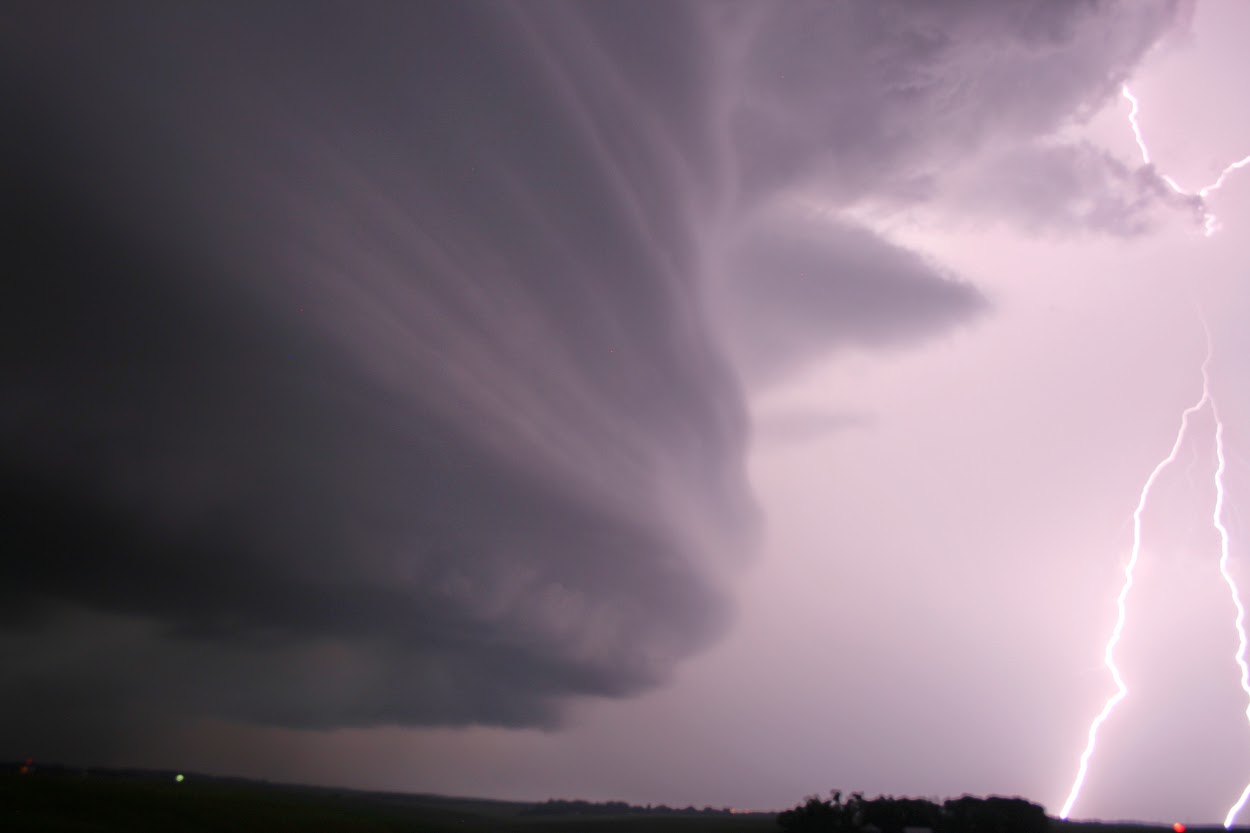 We finally left the storm whilst chatting to some locals in a field and headed for Sioux City for the night, I was really pleased that I learnt from my mistakes from Stationery Boundary events from 2013 and nailed this Set-Up and Chase and we now had got 13 Tornadoes in Nebraska literally in the same area in 2 days, the season was well and truly looking up!!
Posted by Paul at Friday, July 11, 2014