We awoke in Sioux City (Iowa) on this day to a broad 10% Tornado Risk from South Western South Dakota all the way across to Northern Iowa and Minnesota to the east and Nebraska to the South.
A Stalled Low Pressure area over Central Nebraska and a Stationery Frontal Boundary from that low pressure draped east north eastwards along with a Pacific Cold Front further west over West Central South Dakota would be the focus for thunderstorm initiation today.

My initial target was near the Chamberlain area of South Dakota along Interstate 90 and with good road options in every direction, I also chose this target as it would allow us to be bang smack in the centre of both risks areas, the Low Pressure was expected to travel northwards to be near Mitchell by 00z.

We left Sioux City and grabbed some lunch and proceeded westbound stopping at a rest area just west of Mitchell, temperatures were now into the low 90's with dewpoints into the mid 70's - The Cold Front had already fired a line of storms that were travelling Northwards about 75 miles to our North West and we could see the anvils from these from our location. After chatting with Dave Ewoldt he sent me some invaluable surface charts that were showing the LP To be sat to my North West within the hour and with a wrap of 76f dewpoints wrapping into the north east side of the low pressure, the tail end charlie storm along the cold front was getting very close to that bullseye target I had been sent by Dave and he even sent the name of the Town that would be in the bullseye called "Wessington Springs" I also started to note the bottom storm was now not moving north anymore and was anchored about 20 miles to our North, at about this time a further complication happened with a storm firing on the boundary to our south in the warm sector, decisions decisions ? The decision was taken away in an instant though when the next radar scan showed our Supercell to the north do a massive right turn and subsequently become tornado warned in an instant, we shot off north and our road took us perfectly upto the Storm South West of Wessington Springs, the chase was on.

Our First look at the Supercell put us in front of a rotating Wall cloud near Crow Lake and it wasnt long before a Multi Vortex Tornado was a few miles in front of us touching down every few seconds into differing shapes of Tornadoes, picture below. 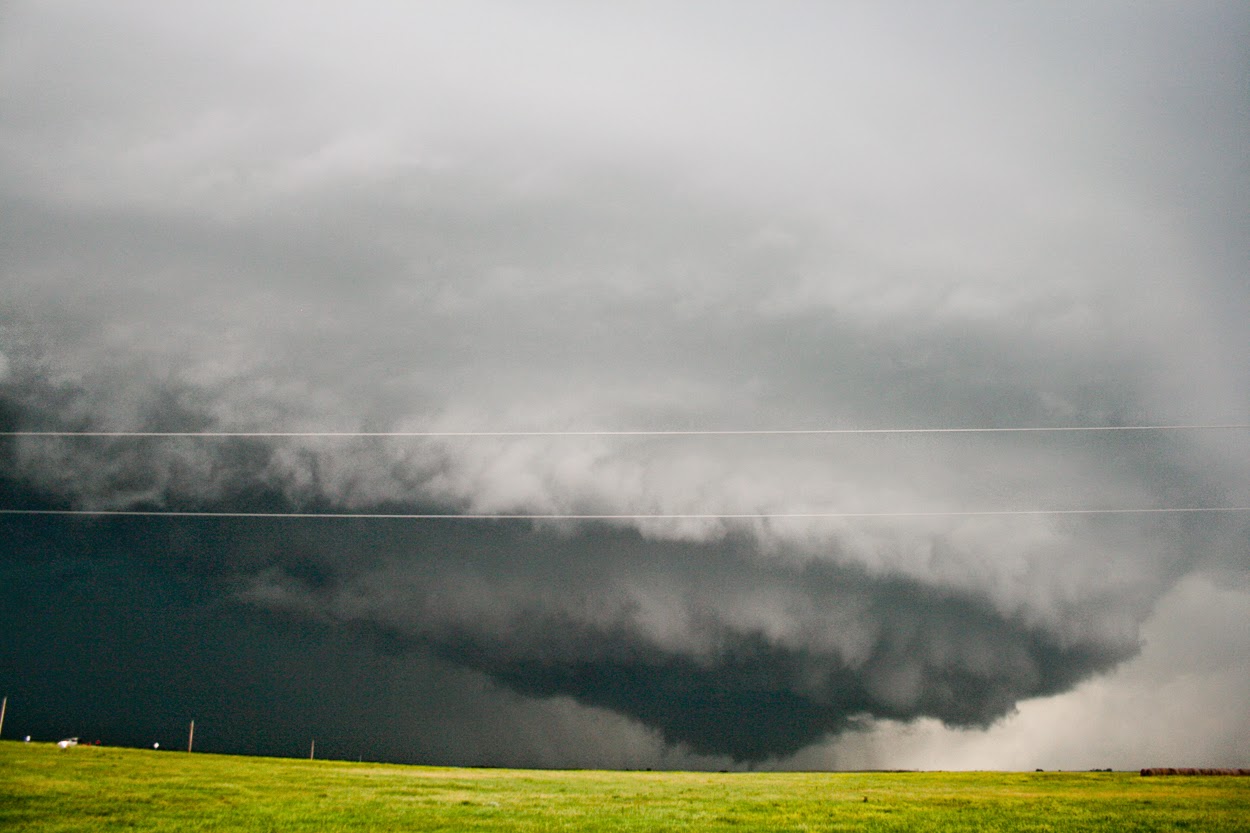 Once again we were looking at an incredible Tornado underneath a classic looking collar cloud just like the 16th and 17th days just gone by. Todays storm was harder to chase but much more fun along dirt roads that were gridded every mile, we headed south after the above picture was taken and then east by about 5 miles just to keep in front of the storm, once again the Cg's raining down were some of the most impressive I have seen and a lot like the forward flank of the 16th June Storm near Pilger.
After getting far enough in front we headed back North to be just South of the Town of Lane and South East of Wessington Springs, unbeknown to us at that time a rain wrapped wedge tornado was impacted the town, we could not see the tornado at all from our vantage point, but we were about to get in amongst more tornadoes from this storm as it was just starting to get going.

We stopped at the Intersection of Highways 34 an 281 and noted some very strong rotation about 1 mile to our south, soon after a funnel started to descend from the wall cloud and we were moments away from our second tornado of the day, our position was firmly in the hook of this cyclic supercell but we were in the dry and had a very clear visual on this developing tornado so we had no cause to move, whilst this was occuring Wessington Springs about 3 miles to our West was taking a hit from the ongoing wedge.

Picture Below of the Developing Tornado Near Lane (South Dakota) 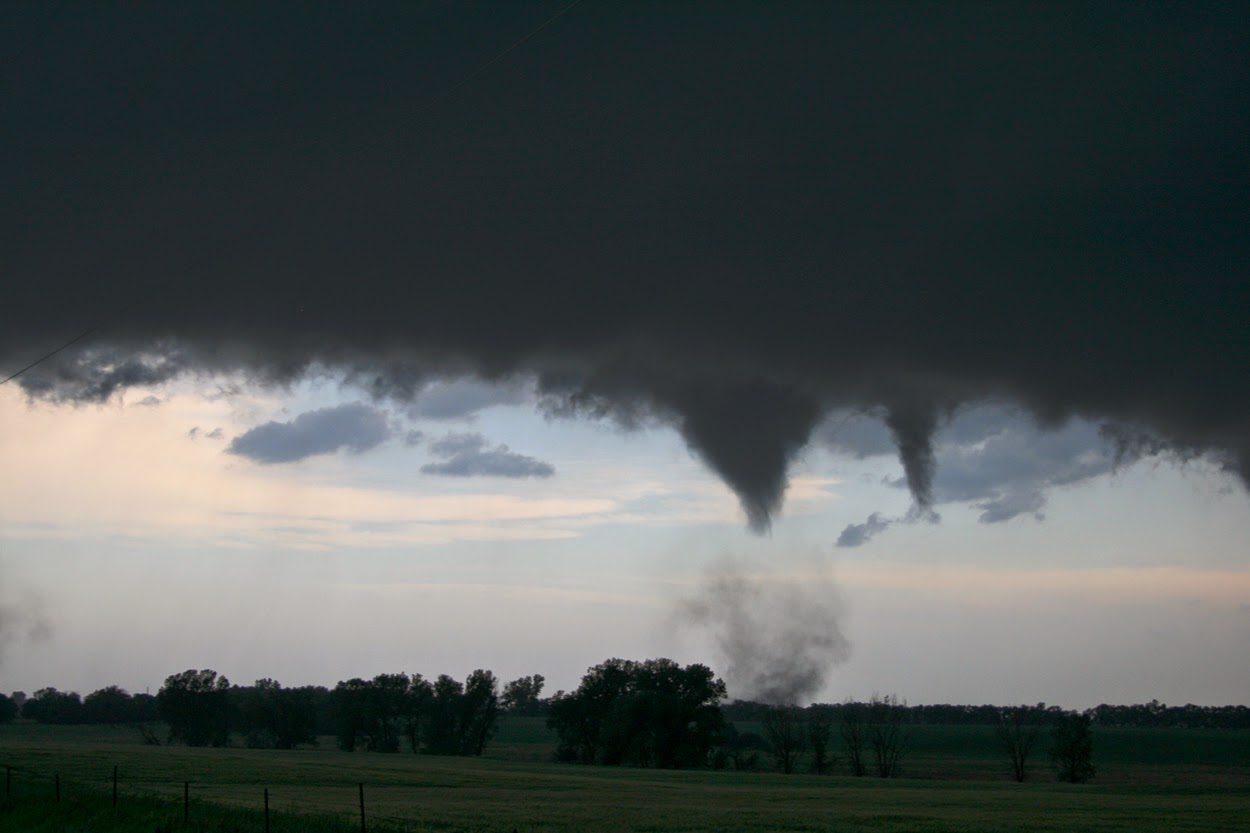 After this we positioned east about 1/2 mile as the above tornado was heading straight at us, this also allowed us to watch the tornado cross the road behind us at close range near the farming town of Lane. 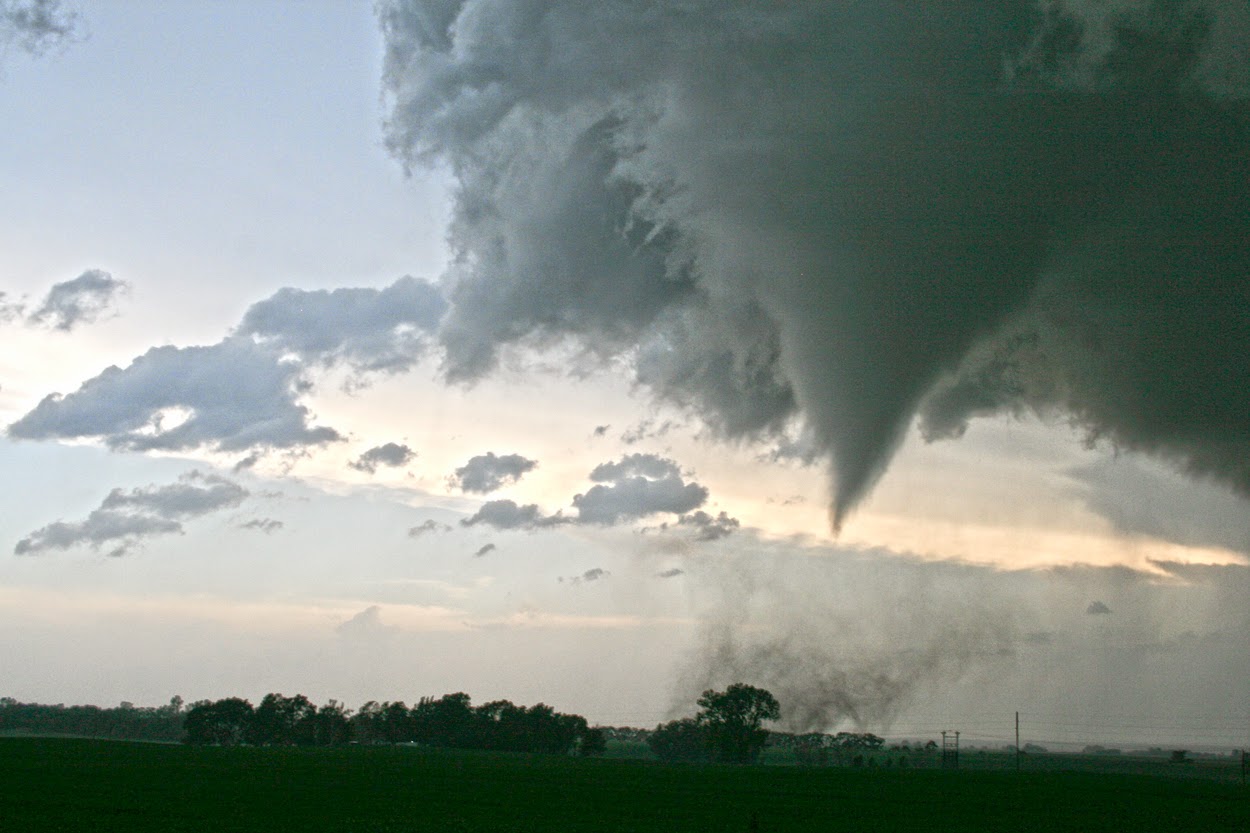 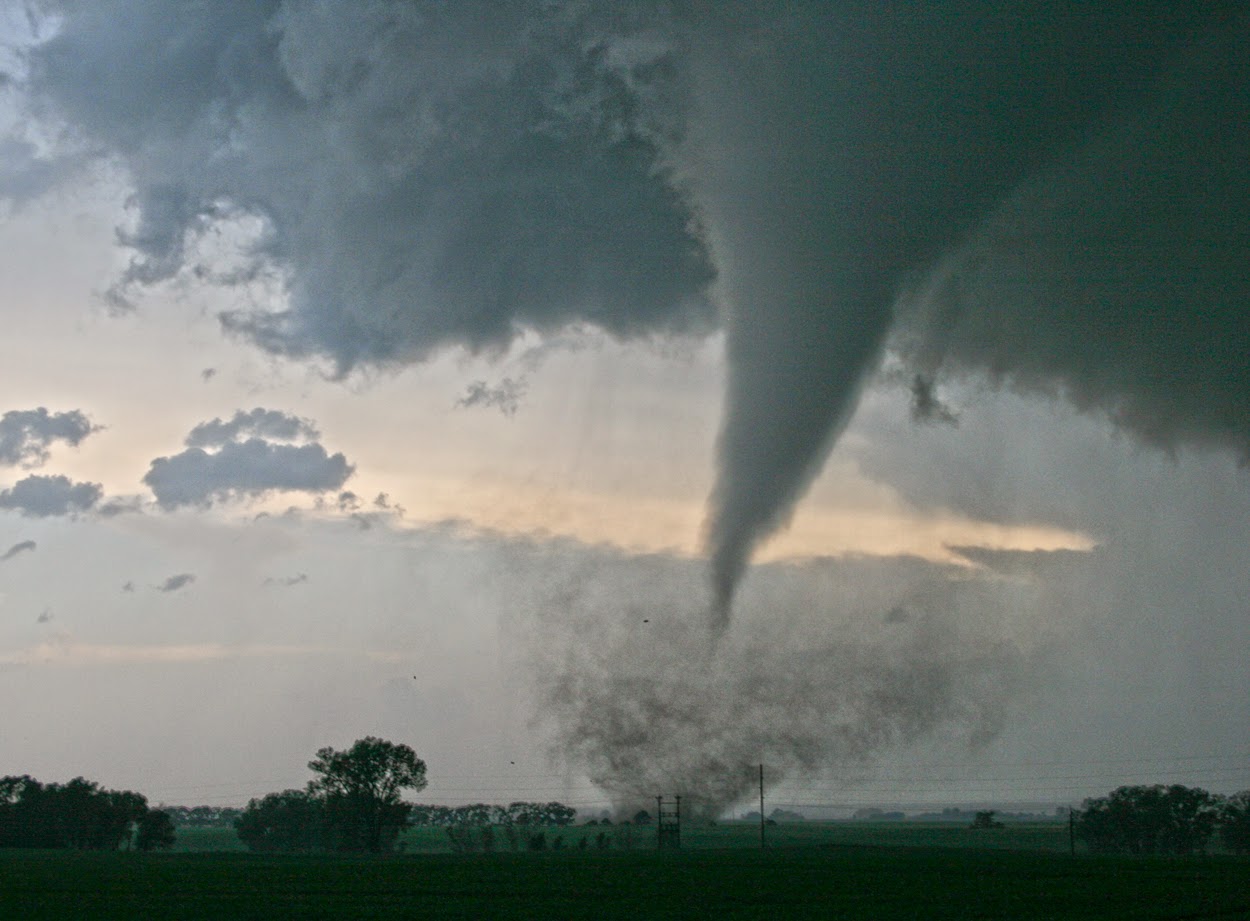 2 Video Clips of this beautiful cone tornado crossing the road behind us at close range.

As you can see from the above videos we did infact have 3 Tornadoes on the ground at the same time once again for the third day running, these cyclic Supercells really were very alike on all 3 chase days, the rope to our south was at one point spinning away in a field a few hundred yards showering us with leaves from the trees it had ripped up. 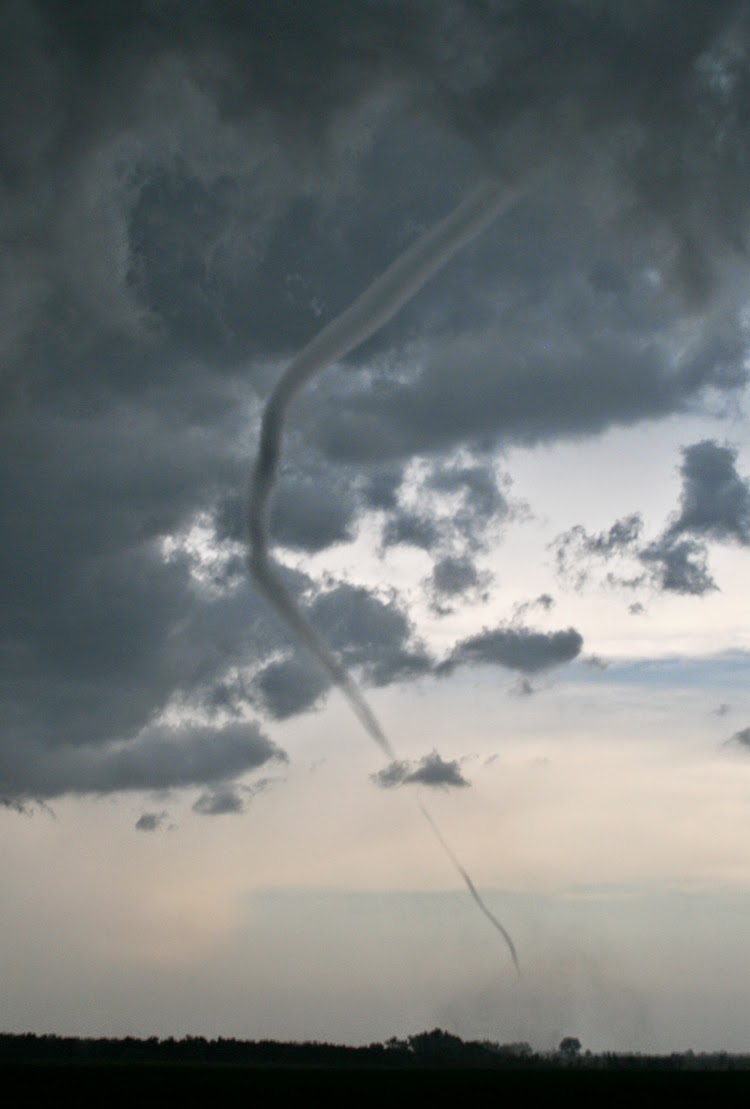 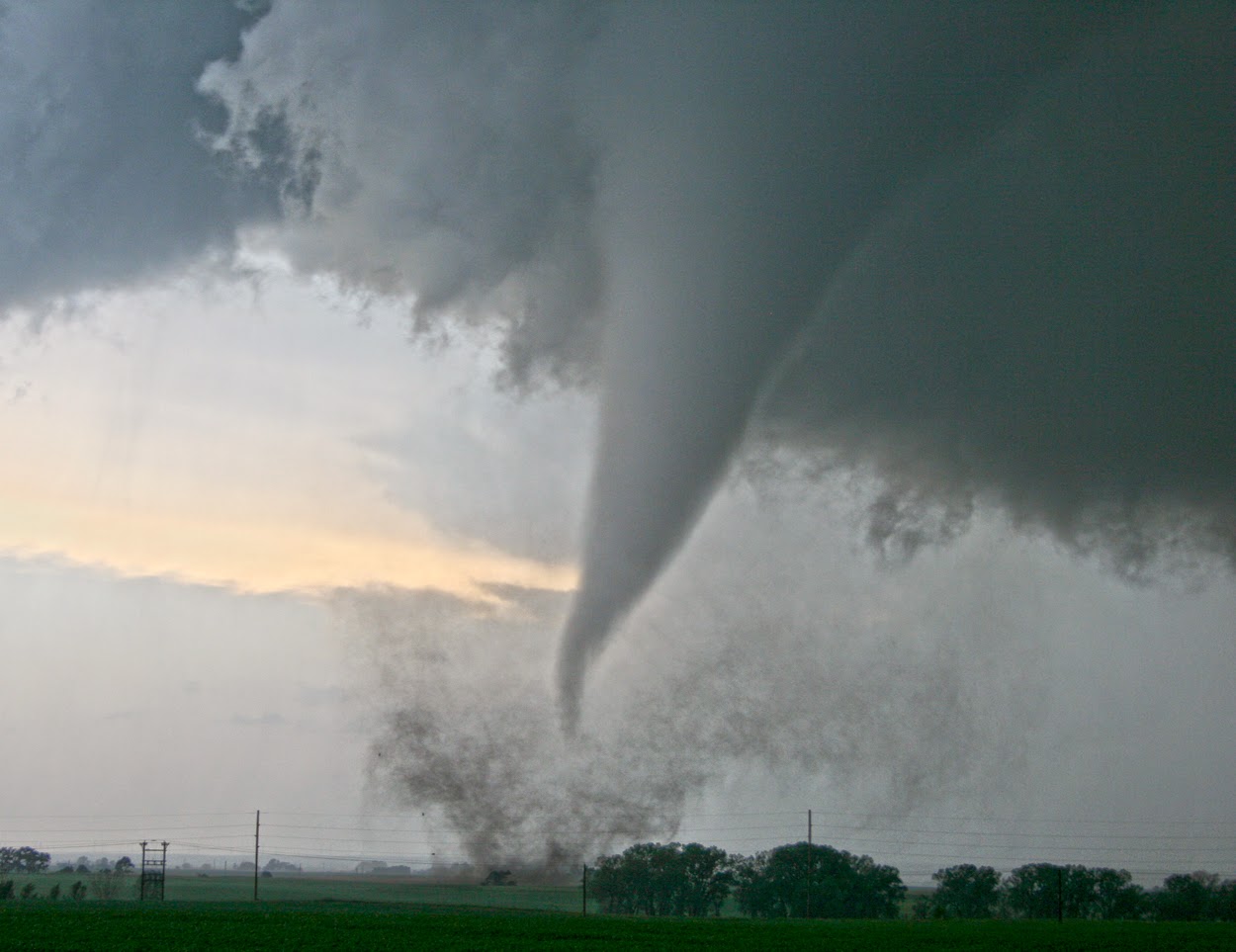 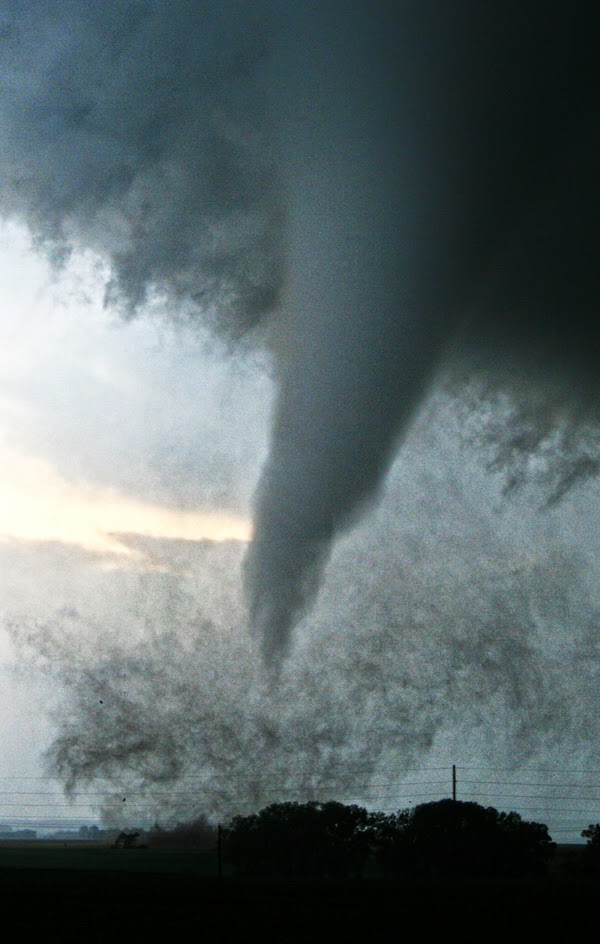 When the Tornado had now cleared the road we went east a few miles then took dirt tracks north and back west to catch up with the now cylindrical white cone tornado heading to the west side of Huron, and unfortunately impacting the farming community of Alpena, it was a job to find good enough roads but we finally caught upto the tornado again and what a sight in front of us as we watched the last stages of the barrel cone and amazing rope out stage.

Some Pictures from just South East of Alpena. 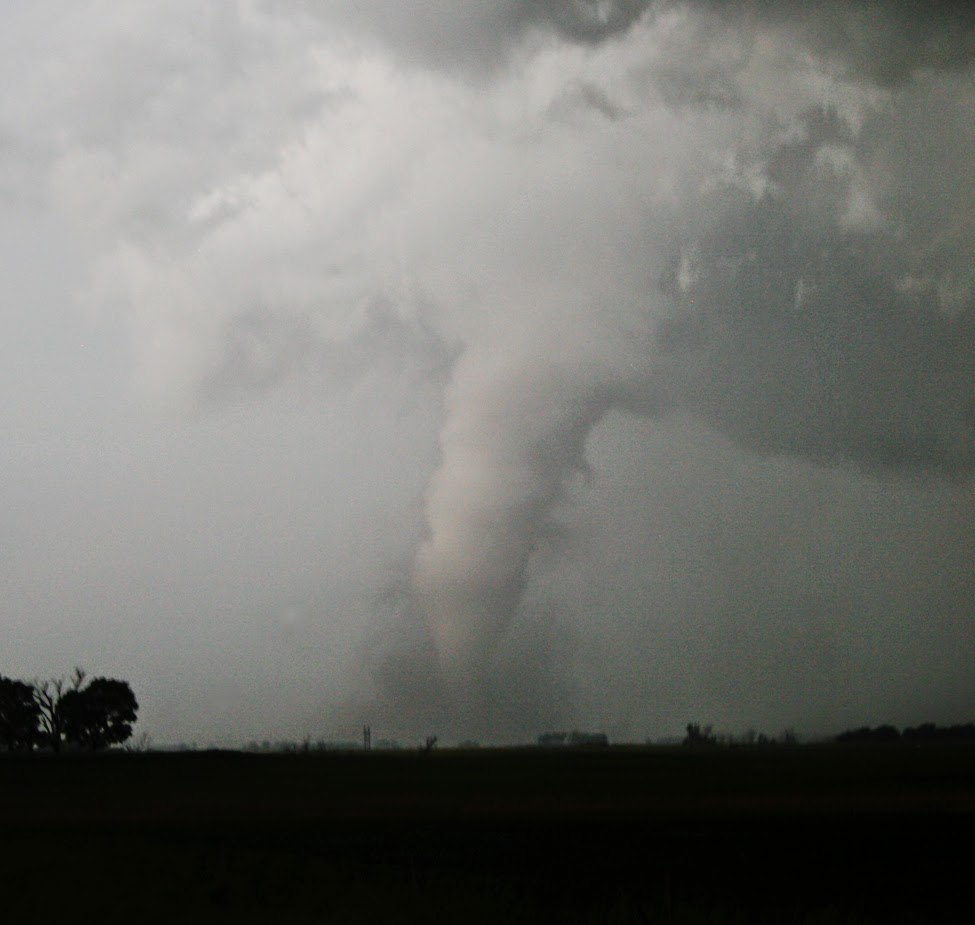 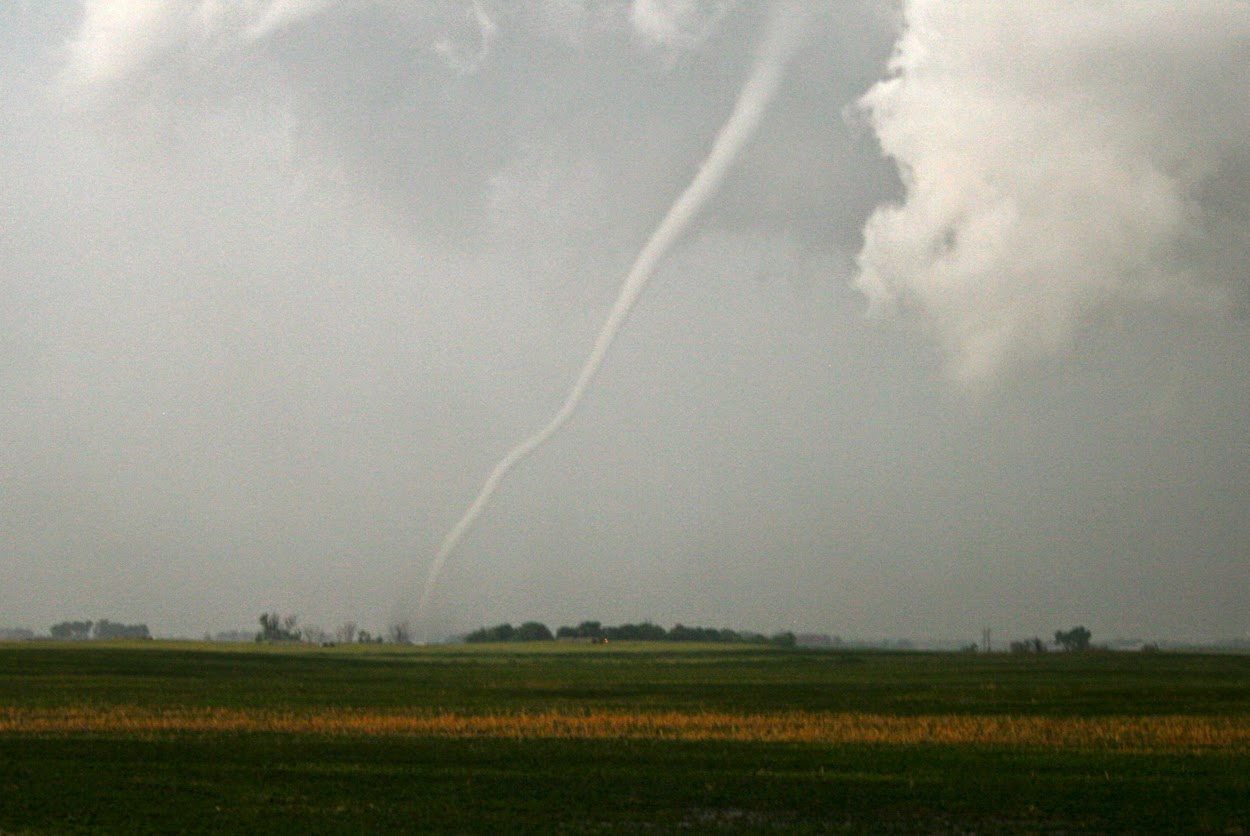 Shortly after the above pictures were taken the tornado roped out and the supercell finally weakened, we headed back towards paved roads and stopped to take stock of the chase day all buzzing with excitement, I had finally bagged my first ever South Dakota Tornadoes and was pleased it was on such a great chase day, we were never in any danger the whole day with escape options and all vortexes were clearly visible all day except the Wessington Springs rain wrapped Wedge which we swerved. We headed to Huron for the night and ate Pizza takeaway whilst going through our pics and video.