Today we started the day in DFW and with the girls on the trip opting to sit this one out 7 of us decided the gamble way out around 400 miles to the Trans Pecos region was worth it and were rewarded with a desert Tornado near Coyonosa and a stunning High based structured Supercell that became briefly surface based in the early evening, the most dangerous part of this chase was the extreme flooding in the Permian Basin and the danger of being washed off the road.

The forecast today was spot on and we got onto the only Supercell near the town of Pecos that was drifting slowly South East. We had a good position on this storm near Coyonosa near Highway 385 and watched as it gained a Tornado Warning, rotation was observed and was very weak at first but this storm was starting to get some really nice structure so we kept south east of it and watched its every move.

Above :- Classic Supercell over Coyonosa (Texas)

The Storm transitioned from Classic to HP And back to Classic numerous times and inflow was very good for all its life cycle. The next shot we got before we saw a brief Tornado near Coyonosa was in a HP Supercell stage below! 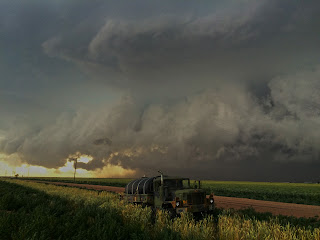 Above :- Love finding random abandoned objects like this whilst out chasing.

After the above picture was taken we stopped along the south road and looked back to the north and watched a brown dust plume lifted into the air connect with the very briefest of funnels above and a 45 second Tornado was in progress. The next part of the chase was by far the scariest though and seeing as we needed to be in Dallas to drop the guests at the end of Tour 1 our only route was back North through the Hail and where the Supercell had been sat for nearly 4 hours. So it was back north towards Coyonosa we went, along the way we witnessed downed power lines where the Tornado had crossed the road, we then got to the part of the road where nearly 3" of rain had fallen and had to negotiate some really badly flooded roads, at times I really thought we were going to be spending the night in the Desert such was the speed and force of the flood waters washing the roads away in front of us, luckily we followed a large lorry through and got out, the next 6 hours was spent following the storms to the Dallas area along I20. 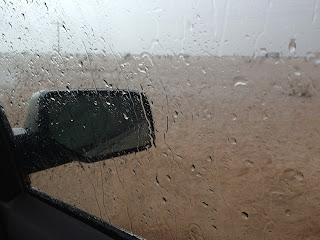 Above :- Rising waters turned the desert into a sea. 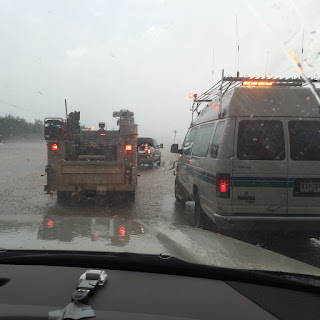 Above :- Us and numerous other Chasers stuck in rising flood waters.

Below ;- SPC Reports for this day.