Chose to stay put today for a slim chance of storms initiating once again around the Black Hills region and did not drive the 650 miles east to Iowa for an Enhanced Risk over there and it paid off big time. SPC Upgraded the 16z update from marginal to Slight Risk after the HRRR Model continued to show 2 or 3 discrete Supercells rolling south east out of Wyoming into South Dakota and into Nebraska and thats exactly what happened so kudos once again to that model. With only 25kts of Deep Layer Shear on offer we were only expecting brief transient Supercells anyway and moisture was also quite meagre with the LLJ Transporting moisture in readiness for a possible big day for tomorrow.

We got onto our LP Supercell just west of Newcastle (Wy) and watched as it did a hard turn to the South East which was good for us meaning the winding roads and bad terrain of the Black Hills to its east would now not be a problem.

We allowed the hail core to hit us and had a bit of fun standing out in it, thankfully it was only 0.5" but still hurt quite a bit. A lovely Hail Bow formed just to our east as the core went past us. We then went south and east and started to get back on the right side of the storm but it's forward speed was 45mph and we were having a lot of trouble keeping up. We took quite a few dirt roads which was great fun as well.

Below : Hailbow and Storm viewed from the South West 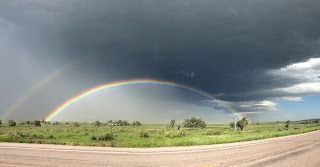 We finally waved goodbye to the storm at Chadron as we did not want to go much further South with tomorrows bigger risk on the agenda so ate Mcdonalds in Chadron and headed east to Valentine for the evening.

After getting to Valentine we were then pleasantly surprised to see a forecast for WAA (Warm Air Advection) Storms to possibly hit the area overnight so a few of us stayed up and shot some great Cg Lightning from very elevated Storms. Another great High Plains Day! 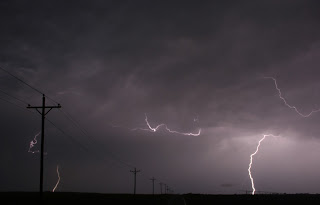 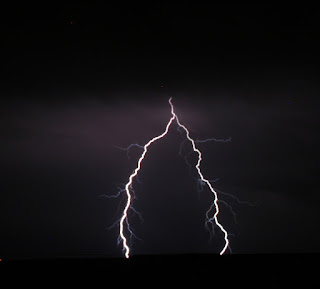