We awoke in Limon for the start of Denver Cyclone Day 2 and knew it would be an early show, the trick for today would be to get near to the Bennett Truck Stop and await the first tornadic supercell that rolls out of Castle Rock and heads North East towards Denver International Airport. We left after a quick breakfast and got to the target in 45 minutes, a tornado warned supercell was already to our South West and looked very HP in nature, we took the south road and sat just east of the action area and watched this storm hit some sort of boundary and die a painful death, another storm following the same path did exactly then same and then another, something just was not right in this location for today, the storms looks amazing on radar but were really struggling visually, all the while this was happening a big clearance to our east and just east of where we started was beginning to take shape and explosive cloud tops and precip were starting to form, at this time I had a deja vous moment and remembered another set-up like this a few years back that favoured the eastern risk zone so I made a fairly quick decision to leave the area near DIA And head fast east towards the new risk area along a haghway which followed I70 Perfectly.

Below : Radar Grab of the first Supercell of the day SW Of DIA. 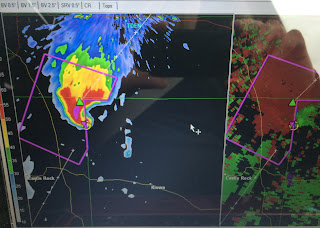 After stopping briefly in Last Chance for a comfort stop we blasted east towards Anton and straight through the core of a tornadic supercell which was heading NNE. Blinding rain and then golfball sized hail greeted us and all the while the reflectivity a few miles to our south was getting stronger all the time, I calculated this would pass the road between Anton and Cope so carried on. A few minutes later the base of the storm came into view and with that a large Cone Tornado heading straight towards us, we were now in the bears cage just to the north of the tornado and I knew this would be a very close intercept.

Below: Poor contrast of large cone tornado near cope due to heavy precip 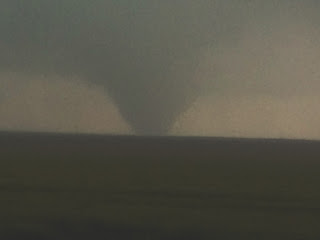 I stopped us pretty much in the path of this tornado and watched as it passed just behind us by about 200 yards. RFD Was flinging hail at us but it did not stop our guests from being outside the cars getting pictures. My car was getting trashed by high winds, hail and rain and I was leaning over trying to protect the electronic equipment at this time, did manage to get a quick Iphone picture as the tornado passed just behind us though. 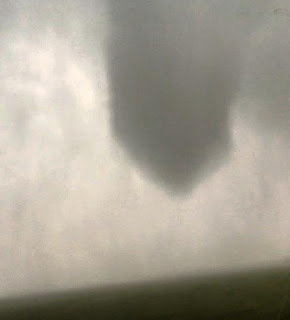 This tornado quickly dissipated and my attention was now drawn to reports of a rapidly rotating wall cloud on another Supercell that had just gone tornado warned to our south east near Stratton. The only route to this was over the top to the north and then slice down the forward flank. Once again we started to take Golfball Hail and once we headed south at Kirk the precip stopped and a stunning funnel cloud came into view just to the right of the road to our south. Reports later confirmed although we could not see the ground behind a valley this was indeed on the ground a few times. 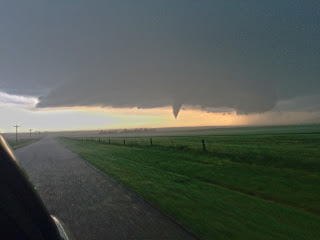 We carried on south and stopped with the funnel cloud literally over our heads near the town of Vona. At this point a huge surge of RFD Smashed into our car and with a bowl shaped mesocyclone just to the funnels west I knew a much larger Tornado was imminant so I got everyone in the cars and headed another mile south under the meso and out the other side and turned around to watch if we could get another tornado to cross the road behind us. The radar grabs below show how we moved our position and the rotational refelectivity.

Below : GR Level 3 radar Grabs just before and as the Tornado was occuring 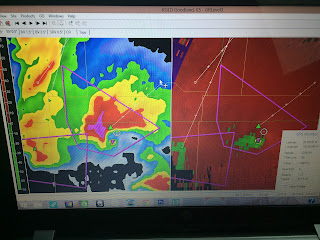 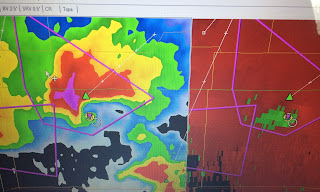 Once we parked and were south of the mesocyclone the rotation and collar cloud were incredible and almost looked timelapsed it was spinning so fast. And it wasnt long before a stunning cone tornado dropped and crossed the road perfectly where we had just been sat. Dry RFD Winds at the time were also incredibly strong at our location.

Below : Vona Tornado Crossing the Road. 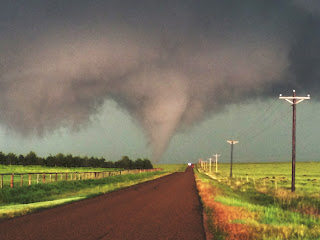 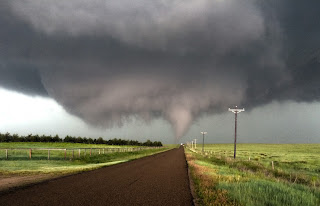 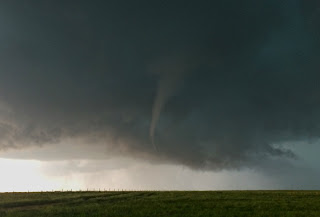 After all this occured and the Tornado became rain wrapped and headed east I decided to punch back north through the core and try to get back North and East of the storm, this was a bit of a mistake as I really should have kept stair stepping down the line and if I had we could have got a few more Tornadoes east of Burlington into Kansas at night. After choosing to blast north we booked the Ramada Inn at Sterling and still had time for 1 more discrete tornado warned supercell just before darkness fell, this occured in a post frontal regime which was odd but nice to see all the same to end the day on.

Below : IPhone Pano of final storm of the day.