Our last chase day did not contain any weather so we awoke in Pierre and set sail for Sterling on a relaxing but boring drive through the lovely Sandhills of Nebraska. There was much chatter amongst my friends about a CME Explosion reaching the heady heights of KP8 And the Auroral Corona slipping quite a way south. Sterling would not only have a lot of height at 4,085ft above sea level but would also have clear skies and also it sits at the top NE Corner of Colorado with nothing much in the way of population to its north. The major problem though is it's latitude at only 42 Degrees North. It is however closer to true magnetic north which is situated in Canada.

We arrived in Sterling around 6pm and went out for our last chase tour meal getting back to the hotel at around 945pm as darkness was falling. One of the other guests (Ian) who had seen the Aurora before in Sweden noticed a fog like appearance on the horizon and started smiling - This would be the signal to head out to darkness a few miles east of Sterling as some of his pictures even from the town were showing glowing green on the horizon.

Was this really going to happen now ? Having never seen the Northern Lights before and missing 2 opportunities over the last 5 years chasing in the Northern Plains was I to break my duck now ?

Below : Picture showing the Northern Lights North of Sterling (Colorado) at 42 Degrees North. 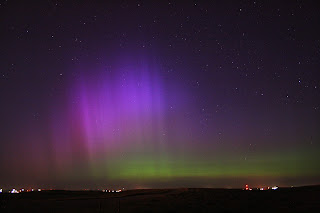 When we got to our location we could see visually a very faint green glow dancing away just above the horizon. As time went past something resembling a hail shaft appeared above the green and it was only when we did some 15 second exposures that the Purples and Blues and Reds started to show up. This was truly an amazing experience as we also had the Milky Way rising behind us in the Eastern Sky. Colorado had not only given us some amazing tornadoes and supercells this year  but was giving us a send off to remember, this is the sole reason I love this place so much.

Below : Pictures From Green all the way through to the Burst of Colours. 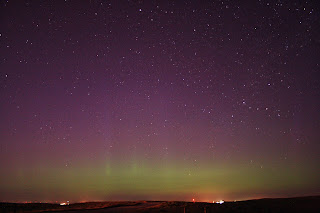 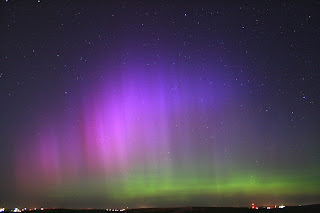 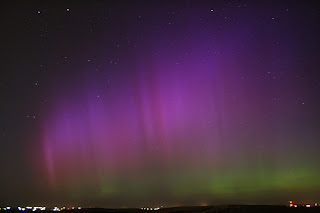 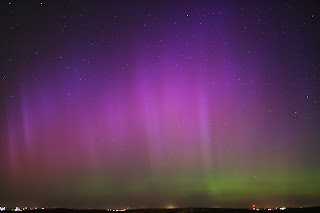 And to finish it off an incredible image shot by the talented Ian Carruthers of the Aurora and Milky Way in a 12 shot stitch.

Below : - Image says it all from this amazing night - Picture Credit Ian Carruthers