Friday the 3rd July had been a hot and humid day across SE England and with an elevated mixed later being advected North West from France with dewpoints in the mid 60's the stage was set for Differential Thermal Advection to kick of Storms just inland from the south coast. MUCape of the order of 1,200jkg was very good for our little Island. The first storms kicked off in the SE Around 2245z and about 15 miles North of Brighton.

I went to a new location tonight to grab these prolific lightning producing storms and everything looked great. The only major fly in the ointment was a rookie mistake leaving my camera remote release cable and battery on my kitchen table. So I had to bomb it back the 20 minutes to my house and by that time a pretty severe elevated storm was on my doorstep so all I had left was the trusty garden view and hope to pull off a few strikes. 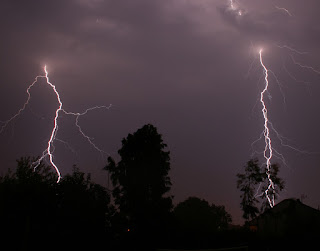