We awoke in Sterling with 2 main risk areas on the table once again, the first was an enhanced risk in Eastern and North Eastern Nebraska with some pretty big parameters on the table up there, the 2nd was once again in Colorado with now post frontal upslope storms, most of our moisture in the high plains had been scoured away but a little but resided in a corridor from Denver to Goodland. With one eye on the changeover in a few days time and the SWODY2 Further south into the Oklahoma and Texas Panhandle we chose Colorado again, and seeing as we already had 11 Tornadoes in the bag everyone was happy with the decision.

After leaving Sterling we headed to Limon for lunch and it wasnt long after this that our first storm went up headed eastbound just north of Limon. This storm rapidly turned into a Supercell and to my surprise went Tornado Warned, one problem today though was its forward speed at 45mph to the east.

Below : View of the Growing Supercell

Our only option to follow this storm was along a maze of dirt roads as the I70 would put us too far south to see much and the next north road was too far north. We had some amazing fun along nearly 100 miles of dirt roads, at one point Mr Vicary's Tahoe slid into a ditch and we had to bump him out of the mud. We also crossed the damage path of the tornado from the previous day as well south east of Anton. Most of us are convinced we saw the reported tornado through a rainbow no less viewed from the west of the storm but with no concrete proof have not counted this one.

Below : Dave looking shifty after he ditched his car into slimy mud. 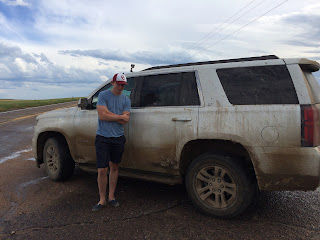 After the above picture was taken and with the warp speed storm already nearing the Kansas and Colorado Border near Burlington we headed east for one last intercept to try and get on the structure side before a new line of storms came east towards us. As it happens the little LP Supercell died a death and we were treated to a bit of a bonus as the line segment put on a bit of a shelf cloud show for us and we grabbed some nice pictures before sunset in Kanorado. Ended the night in Burlington. 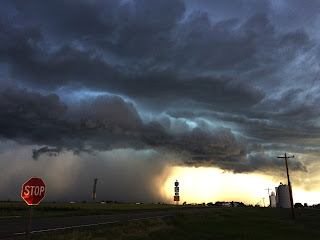 SPC Reports page for this day Below