We started today in Lubbock and SPC Had a broad Slight Risk area and 5% Tornado risk across most of the Texas Panhandle and Eastern New Mexico. Once again I liked an area NW of Lubbock towards Clovis and we got a quick lunch and ate at a park and as we were doing so big towers were building 30 miles to our North West. We headed off and it wasnt long before we were looking at a developing Supercell. This time it was discrete and not only that was pretty much stationery.

It was hard at times to work out the storms motion thinking it was going SE But in reality it did not move for a good few hours, it rapidly turned into a HP Storm which as it was sitting over a flat brown field the green sky made for some great pictures. 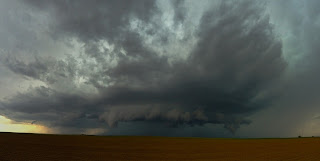 After a few hours of watching this storm and it started to move off the boundary and move away to the North East it started to go outflow dominant and merge with other storms to the north, we dropped further south and west and picked up a stunning Classic Supercell moving out of New Mexico, we drove right under the base of this and down the eastern edge. Again some of the Cg lightning with this was spectacular but like Supercell number one after a few funnel clouds and weak rotation it also started to go outflow dominant and HP in nature. 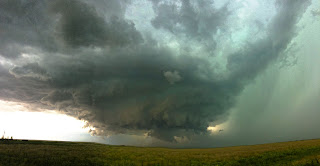 We now had a really nice South East road and watched as a stunning shelf cloud set-up. Dirt and dust from the field was also being lofted into the storm now which made for more stunning pictures and video. But ultimately it was game over for today and we retreated to Plainview for dinner at Chillis before heading north to Amarillo as this would be the last of the Southern Plains chases for us this season and we now needed to head north for the next week of chasing.

Below : Large Shelf cloud with dust on HP Supercell near Morton (Texas)