SPC Today went with a very small 10% Tornado risk area in NW South Dakota and surrounding that a large 5% box covered most of Eastern North Dakota and most of Central and Eastern Montana. Supercells were expected to initially be discrete before a huge bow echo or line segment would once again turn into a derechio with 80knt 500mb winds and 5,000jkg of MUCape on tap later on.

We got to Faith and had some lunch and then pressed on towards Bowman. A nice Supercell was already in progress South East of Glasgow (MT) and this was travelling towards us at about 35mph. I took us South from Bowman towards Ludlow and sat on the ND/SD Border and watched as this storm rolled in. It was Classic in appearance and had a very well defined Hail shaft in the forward flank. A few motorists in expensive cars rolled upto us and asked if they could head north into Bowman to which I replied "Not if you value that lovely Red Mustang" It always amazes me people can not see hail falling in front of them. The rotation as the wall cloud and rain free base went over our heads was really picking up. The storm by now was about 5 miles to our east so we had to blast south to Ludlow and take some dirt roads (Highway 858) east for about 10 miles to get to our next paved road (Highway 79) near Ralph.

Below : Supercell Structure as it approached us North of Ludlow & Radar Grab 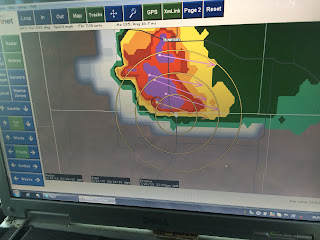 Once we got to paved we were once again just SE of the storm and with it really ramping up should have stopped there for 5-10 minutes but knowing it was diving south east at quite some pace I decided to do the extra 12 miles south and then get on our old friend Highway 20 to go east towards Bison, This would utimately be a mistake as once we were halfway down that route a big white cone tornado dropped pretty much where we sat about 10 minutes before. Aaargh the joys and luck of storm chasing!

Below : Structure near Ralph just before a large white cone tornado dropped.

About 10 minutes after that picture was taken above we stopped abruptly as the big white cone tornado was clearly visible in our rear view mirrors. 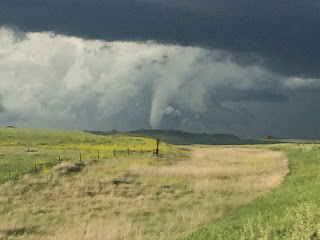 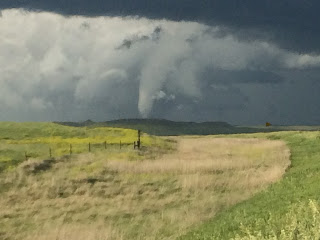 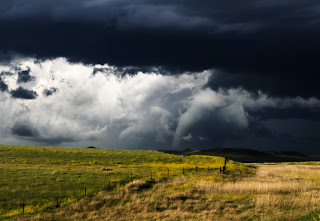 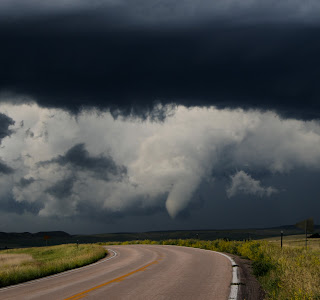 The tornado finally lifted after about 10 minutes and we continued on our journey south and east, about 5 miles after turning east on Highway 20 we noticed another brief tornado on the ground which was quite a thin rope, some of the guys on the drivers side got a picture and some video of this Tornado but it was only on the ground for a minute. We continued on and yet another pencil rope tornado dropped, this was about 8 miles North West of Bison 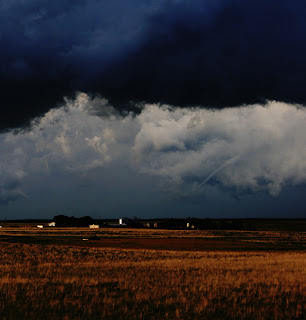 This was starting to turn into quite an amazing day with our Supercell still totally discrete and seemingly getting even stronger. Roads at this point were now not going to be kind to us and seeing as we were now North West of the core and hook area if we wanted to see more tornadoes from this cyclic supercell we would have to get into the bears cage and flirt very closely to any tornadoes that might be rain wrapped. As we went east from Bison we punched through golfball hail and on approaching the junction near Meadow and Coal Springs we saw tornado number 4 at close range whilst getting pounded with hail. This was a bowl shaped multi vortex tornado, again we have lots f videos of this tornado and some guests have pictures which they will forward onto me.

After seeing the Multi Vortex we pushed on along Highway 20 towards Glad Valley where we encountered hail upto baseball sized which put some serious dents in the cars, once again we punched through the bears cage and this time witnessed tornado number 5 for the day SE Of Glad Valley which was a tall pencil cone tornado on the ground for about 3 minutes.

Below : Tornado Number 5 and Radar Grab 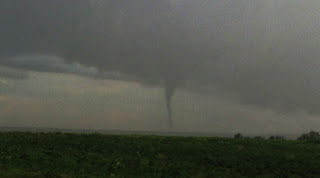 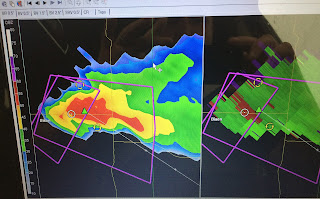 We got to Isobel and gassed up and made room arrangements for the night and plumped for Pierre, and we had 1 last look at this amazing Supercell that had been ongoing for nearly 8 hours now and travelled 275 miles in the process. 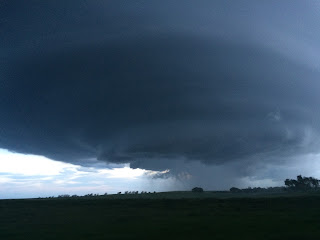 After all of that and getting to Pierre around 1230am we thought that was it for the day. But...........off to the west of us we had the little matter of a Derechio heading towards us at 75mph from the Rapid City area with embedded tornado warnings thrown in for good measure. We calculated we had about 45 minutes before this would slam into us at Pierre. Some weather stations were recording 95mph straight line wind gusts with this so we knew something major was on its way.

When it hit us at 230am in the morning we had 2 very distinct strong wall clouds go pretty much over the hotel so it was no surprise to hear the tornado sirens blaring as it hit us, we measured 150km per hour winds in Pierre and the damage was extensive. And just before that little event hit us I managed to pull off probably my best lightning picture of the trip just to round things off.

Below : Cg Lightning in Pierre (SD) 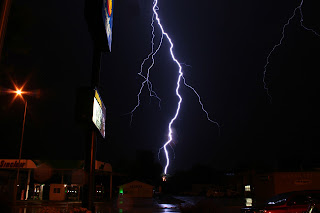 We have extensive video of the derechio which I will post up soon. This was a great end to the season and with another 26 Tornadoes for the season I was looking forward to a well earned steak tomorrow evening.

SPC Reports page for this day Below