Awoke today bleary eyed in Spearfish (SD) After our early morning Devils Tower lightning shoot. SPC Had an enhanced risk for a possible derechio later in the day but before all that Montana had another chance to redeem itself for yesterdays epic bust. We headed into SE Montana and sat around 30 miles east of Broadus watching a developing discrete Supercell. I stayed where I was for 2 reasons, the first was the views east of Broadus looking west which were superb and easily 50-60 miles and the 2nd great Internet coverage. Our storm was moving east south east at about 40mph so it would not be long before the storm would come to us. Our first look at closer range was of a stunning Classic Supercell with attendant tornado warning on it. The structure was very nice and we got onto Highway 202 which was perfect as it went ESE Towards Belle Fourche.

Below : First Views of the Classic Supercell east of Broadus 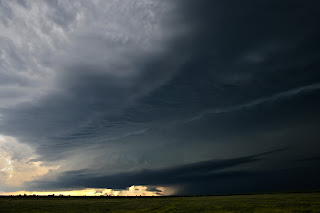 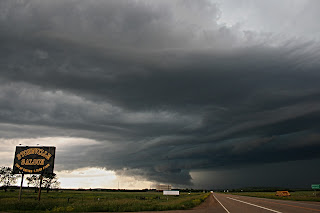 We continued on Highway 202 and kept stopping every 5 miles to look back at the ever increasing HP Nature of the Storm, at one stopping point we put ourselves right in the hook of the Supercell as it went tornado warned again. A much bigger problem was the sporadic softball sized hail falling around us although we never thankfully took a hit to the cars at this point such was the random nature of the stones falling.

Below : In the Hook and GRLevel 3 Radar Grabs showing our position. 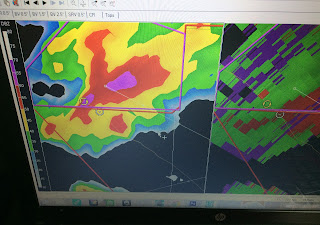 We continued onwards again and followed the storm to just outside of Belle Fourche. Highway 202 in this area cuts through Montana, Wyoming and South Dakota in the space of 10 miles so this became a tri state supercell in a matter of 15 minutes. The Cg Lightning was increasing and a much stronger wall cloud with decent rotation and tighter reflectivity was beginning to start at this point. If my camera was good enough the structure at this point was mind blowing and the Cg's raining down at about 20 per minute, my camera could not do this storm justice but managed to get a cg shot every 1-2 second exposure at F22 & ISO 100 On 2-3 second intervals.

Below : HP Supercell leaving Wyoming and entering South Dakota and a Cg Shot 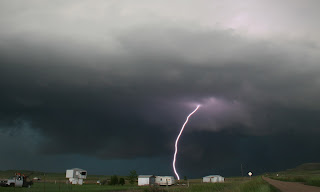 At Belle Fourche I had a decision to make to wether drive south towards Spearfish or to carry on east on Highway 202 as we know had 2 Supercells and both were once again Tornado Warned. I went straight across at the junction allowing the initial supercell more time partly also because the amount of times this season I have driven away from a storm and it has produced 10 minutes later I could count on 2 hands. The velocities at this time were much better also and in fact so strong I really thought they were reading wrong as whatever was buried in the rain had to be substantial for such a strong couplet with 125kts of gate to gate shear. About 10 miles East of Belle Fourche we stopped to be about 2 miles south of the strong hook echo and could not believe it when a very large 1 mile wide tornado cleared enough of the rain to afford us a view just before darkness. Finally a Tornado for Tour 4!

Below : Radar Grabs and Pictures of the Wedge Tornado near Hereford (S Dakota) 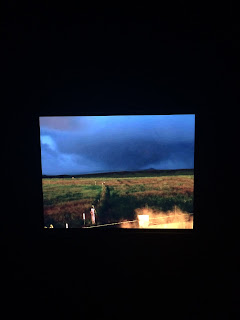 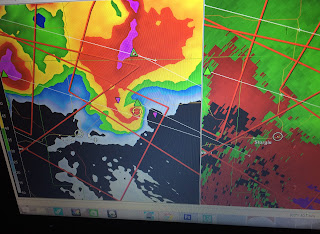 After this we caught back up with the storm east of Rapid City and tried to re-intercept what had now been a large wedge tornado on the ground for 35 minutes but just could not get a clear enough view. What did throw me was for the first time I have ever seen SPC Issued a PDS Severe Thunderstorm Watch Box, This was for 100mph straight line derechio winds and it was at this point we aborted the chase near Wall and headed back to Rapid City passing numerous 18 wheelers which had been blown on their sides along I90

All in all one of my favourite chases of the 2015 Season along with some great pictures and also recognition from NWS Rapid City when we sent them our Tornado Picture and they verified it with local EF2 Damage in the Hereford area.